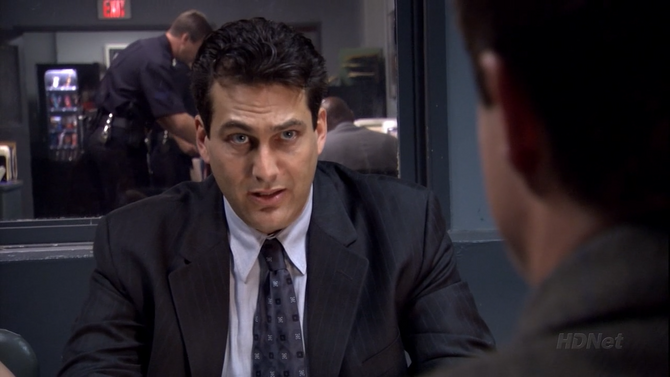 Detective Fellows interrogates Michael about the disappearance of Kitty Sanchez.

On Bring Your Daughter To Work Day, Detective Fellows and Detective Streudler interrogated Michael about Kitty's supposed disappearance at a Newport Beach police station. With the evidence mounting against Michael, they offered him a deal: squeal about your father and we'll drop the investigation about Kitty's disappearance.

Maeby, posing as Fellows' daughter, found Kitty hiding in a back room in the PD and told the truth to the dectives that they knew Kitty had boarded the Lucille which was sunk in G.O.B.'s Disappearing yacht illusion. Detective Fellows then told Michael and Maeby that they were free to go. ("Not Without My Daughter")

Retrieved from "https://arresteddevelopment.fandom.com/wiki/Detective_Fellows?oldid=23165"
Community content is available under CC-BY-SA unless otherwise noted.