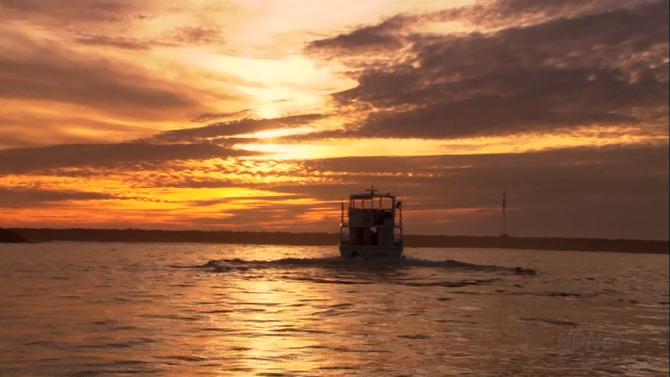 "Development Arrested" is the thirteenth episode of Arrested Development's third season, and the season finale. Lucille throws a yacht party to celebrate the family's recent success, but the Bluths learn the sailing is still far from smooth.

The episode opens with Michael Bluth being honored by his family for his work in getting the treason charges against his father dropped. At the party, Michael breaks into tears, which the narrator says is due to the fact that his family would now be part of his life for a long, long time.

The day before, Michael woke up to find George Michael in his bed. After getting to second base one night, then finding out they were probably related, Maeby kicked George Michael out of their room to prevent further make out sessions. Michael figures his son is just nervous about his dad running a successful company for a change, now that all the charges against George have been dropped.

In fact, on the television show Mad Money, Jim Cramer upgrades Bluth Co. from a “Don’t Buy” to a “Risky”. Michael asks his son if he has anything on his mind, and George Michael suggests moving out of town now that things are turning around. Michael promises he’ll discuss it later, after breakfast with the family.

And so, the family gathers at the penthouse for a catered Sunday brunch. Lucille suggests throwing a party on the same boat to finally name Michael CEO. Michael actually expresses hope for the future of the company and mentions in passing that the family could now sell their stock for $2 million each, although they shouldn’t, since the company is now moving forward.

Lindsay privately tells Michael she wanted to sell her shares since she is almost 40 and wants to remarry. George also tells Michael he wants to cash out and move down to Cabo San Lucas. Michael assures them both that the honestly run family business will generate plenty of money, but George warns his son that there was no way Lucille will allow a clean business. She even stole the idea of selling frozen bananas from a Korean immigrant and then had him deported when he threatened to sue. Michael is surprised to find out Lucille was behind all the dirty business.

Michael goes to cancel the reservation on the party boat as Buster is still afraid of the ocean. Down at the harbor, Michael finds G.O.B. trying to flee on a boat that he had been living on. Michael asks G.O.B. how he planned to pay for the boat and G.O.B. replies that Stan Sitwell made a generous offer for his stock, an offer G.O.B. is determined to take.

Michael calls his mother for advice. Her idea was to lease the boat to G.O.B. through the company to show the shareholders the family was united. So Michael sold out just a little. George Michael visits his father at the office, wanting to talk about moving. Michael tells his son the party is important to show how close the family is. This causes George Michael to blurt out that he and Maeby made out reasoning that they didn’t think they were cousins at the time. Tobias had since shown them very graphic photos of Maeby's birth. George Michael feels like he can’t be around both Maeby, and now Lindsay any longer. Michael is shocked and tells his son he can no longer act on his feelings. Still needing to keep the family together, Michael brings up Ann Veal suggesting George Michael bring her to the party.

Lindsay, meanwhile, is doing a little selling out of her own, telling Stan Sitwell that she refuses to sell her five percent of the company, even though he hasn’t made an actual offer. Sitwell expresses surprise that Lucille gave Lindsay less of the company than she gave her actual children. Lindsay is just as surprised to find out that she is adopted. Sitwell apologizes, assuming Lindsay already knew, but she is overjoyed to hear that she isn’t actually related to the rest of the Bluths. Sitwell goes on to explain that he wanted to adopt Lindsay but that the Bluths took her from under his nose when she was three. He suggests she throw a party for her upcoming 40th birthday party. Lindsay does not take this part of the news anywhere near as well.

Maeby, meanwhile, heads to Tantamount Studios, where word is out she is about to be replaced after the studio found out that she wasn’t the age she had claimed to be. She finds out that she wasn’t going to be fired, and in fact the studio had already received ten offers on Maeby’s life story. The only catch is that she needs to get her family to sign their rights away to the story.

Michael was having trouble sleeping after having compromised his morals. He was also having trouble with the fact that Lindsay was currently sharing his bed. Lindsay happily tells him the news of her adoption and propositions him, claiming that if she doesn’t get divorced and remarried in a month, she is going to sell her shares. She asks Michael to marry her but even he couldn’t sell out that much.

The next morning, Michael awakes to find Tobias in his bed. He tells Michael that he also wants to sell his shares and move on. Michael tells Tobias that if he can find another venue for the upcoming party, one that isn’t a boat, perhaps he can put Tobias on the company payroll as an Events Coordinator.

Soon, George Michael visits Ann’s to try and win her back. Her Uncle Paul answers the door and tells him that Ann has moved in with her new boyfriend. Feeling that he can’t go home, George Michael decides to seek out his own creepy uncle. At the same time, Michael confronts Lucille about the Lindsay's adoption, which she openly admits to. She claims that they didn’t tell anybody Lindsay was adopted because it would look bad if people knew they took in a child just to stick it to the Sitwells.

Michael says this is a problem, because it makes it harder for him to keep the family from selling their shares. Lucille suggests a payoff called an accrued cash dividend. The family won’t get their money until they sign an agreement promising not to sell their shares for ten years. This maneuver is once again illegal.

Tobias catches up with Michael and tells him he had booked the RMS Queen Mary for the party, thinking this was a chain of nightclubs and not a luxury ocean liner permanently docked south of Los Angeles. He has also booked G.O.B.’s old stripper troupe, the Hot Cops. Buster, still terrified of the ocean after having his hand bitten off by a seal, begins to dread the party.

George Michael catches up with G.O.B. at the harbor and finds out that G.O.B. has been dating his ex-girlfriend Ann ever since he judged the Miss Inner Beauty pageant. They had been living together on the boat. G.O.B. told George Michael that Ann needed a man, and George Michael decides to become one by punching out G.O.B. Ann becomes very upset.

As is Buster, when he sees the ship where the party is being held. Maeby is trying to get the family to sign away their TV rights to her story. Lucille is trying to get signatures from the family too that would prevent them from selling their company stock. And G.O.B., after hearing Lindsay say she was adopted, and upset that Michael sent George Michael to the docks, goes into a sort of knee-jerk revenge mode and tries to proposition Lindsay. Her reaction is very negative and violent to say the least.

Lucille asks Maeby to collect signatures for her, offering each family member $100,000 to sign. This neatly solves Maeby’s TV rights problem as she can trick them into signing away their TV rights. Michael addresses the gathered crowd. While lauding each member of the family, Michael realizes that all of his efforts to keep them together have paid off and he begins to cry. The tears shown at the beginning of the episode are not tears of sorrow, but in fact tears of joy.

After the speech, G.O.B. tells Michael of his run in with George-Michael and how he offered to let the boy have the yacht if he didn’t hit him again. Upset that his son was fleeing somewhere in the yacht, Michael prepares to leave the party. Lucille tries to stop him by reminding him that it wouldn’t look good to the investors. Michael chooses to ignore her and for once runs off to look after his son.

Stan Sitwell approaches Lucille at the bar, remarking that he's never seen a CEO cry before and that perhaps Michael is a curious choice to run the company. After a quick negotiation, Lucille agrees to sell Stan the company for 12% above the market value. Using one of the telescopes on the ship, Michael spots the C-Word in the harbor. Rushing to a rubber dinghy, Michael chases after his son.

And that’s when G.O.B. notices something too: SEC police boats approaching the party. Lucille wonders who tipped off the feds to the company’s latest misdealings. That’s when the informant steps forward. Annyong, Lucille’s adopted son, who reveals that he dobbed them in as revenge for his grandfather, the man Lucille stole the banana stand idea from. Lucille doesn’t want to go peacefully though, and Michael catches up with his son.

George Michael explains that with Ann dating someone else and Maeby being his cousin, he couldn’t stay in Newport. Michael informs him that Maeby isn’t actually his cousin as her mother Lindsay is adopted, but that he still can’t be with Maeby because he’s only 15 and that even though she isn’t a blood relative, she's still family.

Suddenly, the yacht is rocked by a huge wave as Lucille tries to power the RMS Queen Mary off the dock and into the open sea. The boat’s rocking sends Buster overboard and into the ocean, his second greatest fear. He is soon confronted by his greatest fear, a seal with a yellow ribbon tied around its neck; the very same seal that G.O.B. had used in his magic act until it developed a taste for flesh and caused him to dump it in the ocean. It was the very same seal that bit off Buster’s hand.

And the RMS Queen Mary and C-Word both make a break for it. George Michael offers to go back and stick with the family, but Michael finally realizes that his son is the most important thing in his life. With a full tank of gas, a house waiting in Cabo and $500,000 in cashier’s checks he decides to let the family handle their own problems for a change while he spends some quality time with his son. Michael pushes the throttle forward and he and his son motor off into the sunset, with the narrator saying "It WAS Arrested Development".

Michael and George Michael finally arrive in Cabo, and the next morning Michael wakes up. However, Michael receives another surprise bedfellow: his father, who had woken up next to him. George greets his son and then asks how the party was.

Meanwhile, Maeby and her agent attempt to pitch their idea to "a Hollywood icon", the real Ron Howard (who had been narrating the series throughout its run). Howard tells them that he does not see the concept working as a series, which draws expressions of disappointment from Maeby and her agent. It is then that Howard says the final lines of Arrested Development Season 3: "Maybe a movie."