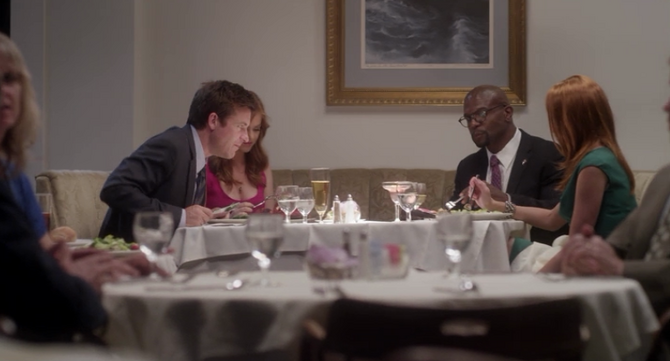 "Dire Straights" was the seventeenth episode of chronological re-cut of Arrested Development's fourth season. It premiered on Netflix on May 4, 2018.

George Michael has begun dating Rebel Alley and is feeling good about himself. Meanwhile, Maeby has called Lindsay to find out her relationship with Herbert Love is going. Unbeknowst to Lindsay, Maeby is being paid by Herbert Love's aide to find a prostitute for him and Lindsay is fulfilling this role. Maeby suggests that Herbert and Lindsay could have a meal at the Balboa Yacht Club, on the family account, in order to impress him.

Tobias continues his work as a therapist/musical producer at Austerity. The rehearsals for his Fantastic Four musical are progressing although Argle tells him that they will need more money to stage it. Tobias wants a Broadway level production which will cost $700,000 and Argyle thinks he could pay for it if his sister, Lucille 2, could call in some debts. However, Tobias doesn't have the rights to the Fantastic Four and DeBrie tells him that Imagine Generic, Ron Howard's company, owns them.

That evening, Lindsay arrives with Herbert Love at the restaurant. She is told that the Bluths have already been seated and she sees that Michael and Rebel are having a meal there. Lindsay and Michael greet each other, try to decide how they know each other, and they decide to act like they've never met before. At the meal, Rebel and Herbert clash due to their opposing political beliefs. Michael insults Ron Howard, as he is still unware that he is Rebel's father, not her lover. Michael excuses himself when he gets a phone call from George Michael who wants to meet up but Michael lies and pretends to be at a business meeting. Back at the table, Rebel asks Lindsay how she can support a man who is a misogynist. Rebel then gets a call from George Michael who wants to know if she's free. The meal is over and Rebel tells Michael that she must go home to look after her sick son. Michael thinks she is going to see her other boyfriend and is jealous, although he pretends not to be. He blames Lindsay for the evening's events and rips up her signature for the movie.

Michael phones back George Michael, offering to spend time with him after all but George Michael says he now has a work issue he must deal with. He is actually meeting Rebel at his dorm. Back at the restaurant, Michael bumps into Lucille 2 and Arygle. They chat and, when Lucille 2 leaves, Argyle threatens Michael and tells him to pay back his $700,000 debt to Lucille 2.

Michael returns to the model home and discovers Tobias there. G.O.B. has sold a model home to Tobias and Tobias reveals to Michael that both he and G.O.B. are dating celebrities, although he doesn't say who. Michael tells Tobias that he can either make the film and date Rebel, but he can't do both because Ron Howard will fire him if he finds out about Rebel. After hearing that Ron Howard is involved, Tobias offers to go with Michael to Imagine Entertainment to confront him although Tobias is really there to get the Fantastic Four rights.

The next day, Michael and Tobias go to the meeting and Michael tells Ron Howard once again that he doesn't have the signatures. He also tells him that he should let go of Rebel Alley but Tobias and Ron realise that Michael thinks Rebel is his lover and not his daughter. Ron says it will not affect the movie but he will make sure she never dates him again. Tobias asks for the Fantastic Four rights and when he is rejected, he tries to strangle Ron Howard.

On the next Arrested Development: Fateful Consequences... Michael gets Tobias' signature and promptly tears it up. Tobias returns to Austerity and lies, saying that he got the film rights.

This episode is made up from 9 episodes of the original cut of Season 4. Because the re-cut is chronological and combines the characters' stories into one narrative, new narration was recorded and there is even some additonal dialogue. These changes, as well as which scenes appear in which original episode, are listed below:

Retrieved from "https://arresteddevelopment.fandom.com/wiki/Dire_Straights?oldid=54757"
Community content is available under CC-BY-SA unless otherwise noted.