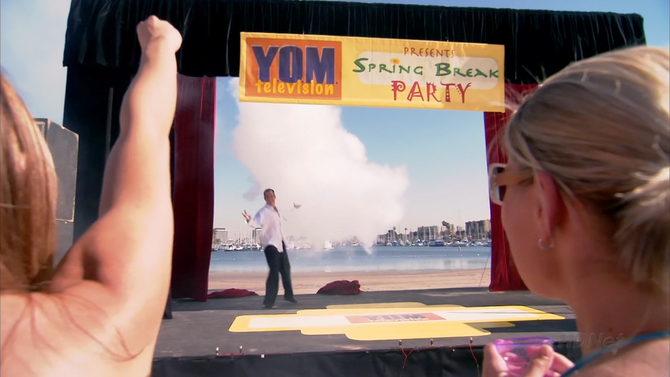 The Disappearing yacht illusion is performed by G.O.B. for the Y.O.M. Spring Break: Newport Beach party and TV show.

In an attempt to redeem himself to the fans of Y.O.M. after a flubbed Shirt-off-my-back illusion, G.O.B. makes his family's yacht disappear. This is G.O.B.'s most successful illusion. The yacht indeed disappears. The secret? G.O.B. blew it up and sank it. Ta-da!

Kitty was on the yacht but survived the explosion by holding on an evidence cooler marked "H. Maddas". ("Missing Kitty")

G.O.B. had hoped that the illusion would be used on a Girls with Low Self-Esteem DVD, but they only used a clip of him dropping a dead dove. ("Not Without My Daughter")

G.O.B. mentions that he doesn't have Spring Break plans since he was embarrassed by Phillip Litt on the Girls with Low Self-Esteem videos for showing 1-2 flubs from the yacht illusion. In reality, there were 14 flubs. ("Spring Breakout")

Retrieved from "https://arresteddevelopment.fandom.com/wiki/Disappearing_yacht_illusion?oldid=32281"
Community content is available under CC-BY-SA unless otherwise noted.