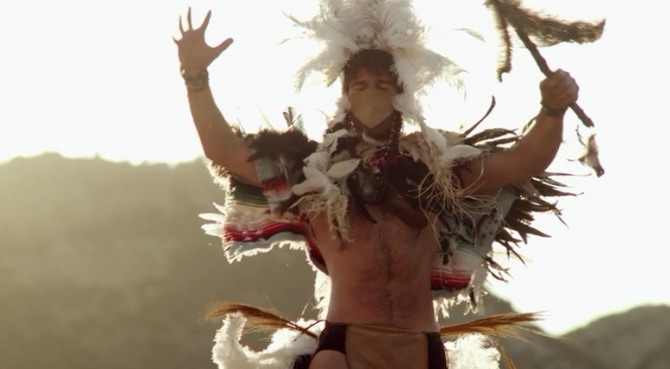 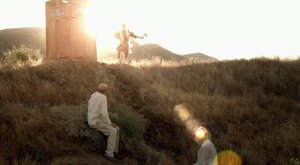 When George and Oscar Bluth are consuming maca in Mexico, George sees the Divine Spirit for the first time, dressed in ornate feathers and attire who warns them "The strong will become the weak, the weak will become the strong". They don't seem to pay it any particular interest, and George insults it, joking that it is trying to market an Indian Casino. (4x2 — "Borderline Personalities")

In actuality, the Divine Spirit was Marky Bark dressed in an ostrich costume composed mostly of pieces of garbage. He was attempting to frighten George and Oscar off the land to preserve his mother's ostrich farm. (4x8 — "Red Hairing")

Years later when his Father B.'s Colony collapses, George is haunted by memories of the vision. Dr. Norman attributes George's lowering testosterone levels to his disregarding of the Divine Spirit. (4x6 — "Double Crossers")

After his father-in-law was exonerated and mother-in-law was arrested, Tobias and Lindsay decided to take a brief break to discover their purposes in life. Tobias was also appalled by Lindsay's revelation that the entire Bluth family thought he was gay. At the model home Tobias happened across a copy of Eat, Pray, Love and ripped off the Eat and Pray sections and, like Lindsay, decided to take a spiritual trip to India with the mantra "A New Start". He even obtained an ANUSTART license plate. ("A New Start")

Lindsay Bluth Fünke had a spiritual awakening when the Shaman told her that was most important to her was at her home. ("Indian Takers") She meets him for dinner at The Ealing Club where she runs into Michael who (on behalf of George) asks her to get Love to oppose the wall project and in return Michael promises to have Stefan Gentles let Marky out of prison. In a hotel room, Herbert and Lindsay make love and Lindsay starts to think Herbert is the man her Indian shaman foresaw in her future. ("Red Hairing")