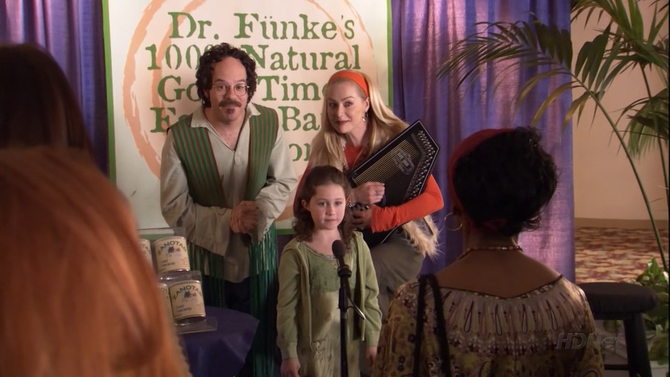 Dr. Fünke's 100% Natural Good-Time Family-Band Solution is a folk group formed by Tobias, Lindsay, and Maeby in the mid 1990s. The band was underwritten by Natural Life Food Company, and once promoted Teamocil and Zanotab. G.O.B.'s wife was a big fan of the group, feeling that their song about Teamocil spoke to her.

Thinking it could rekindle his relationship with Lindsay, Tobias attempted to get the band back together in 2004 for an upcoming Wellness Convention. The band would now be promoting Euphorazine but Lindsay was unable to get into the mood without the aid of medication. George Michael attempted to join by playing the wood block, feeling he has good rhythm. At the convention, Lindsay and Maeby stormed off before performing so Tobias preformed alone. G.O.B.'s wife and George Michael joined him on stage. ("Best Man for the Gob")

Tobias used to keep a picture of him, Lindsay and Maeby in DF1NGTFBS attire on his desk. ("Not Without My Daughter")

When Lindsay began taking Teamocil again for the sexual repression side effects, a flashback to DF1NGTFBS was shown. ("Switch Hitter")

While digging through old Bluth family photos, Michael looks at photo of DF1NGTFBS. ("Fakin' It")

There's no "I" in Teamocil

At least not where you'd think ...

From "Best Man for the Gob"

From "At Long Last... Music and Songs from Arrested Development" 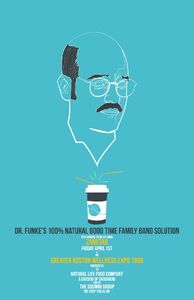 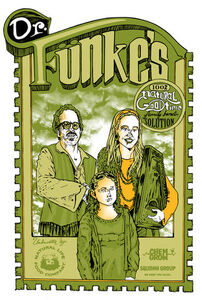 By Charles Moran
Add a photo to this gallery

Retrieved from "https://arresteddevelopment.fandom.com/wiki/Dr._Fünke%27s_100%25_Natural_Good-Time_Family_Band_Solution?oldid=47988"
Community content is available under CC-BY-SA unless otherwise noted.