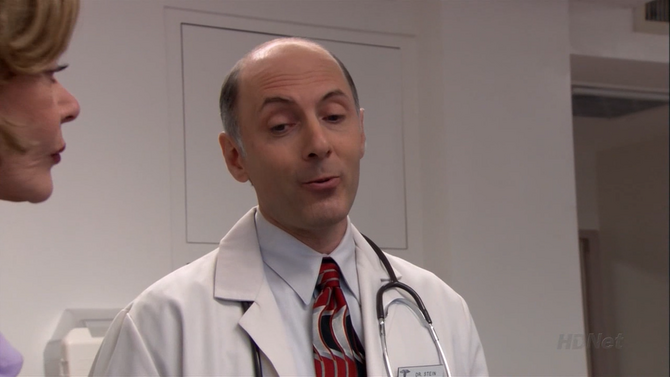 Dr. Stein is the best doctor in the county/state/world (according to him). He likes to experiment with procedures, such as flipping the middle and index fingers.

He is played by Dan Castellaneta, best known for playing the voice of Homer Simpson on The Simpsons. During his appearance he repeats Homer Simpson's famous line, "d'oh!"

When Michael is admitted to the hospital for a stress ulcer, he and Lucille are angry at receiving Dr. Fishman, the literal doctor. Dr. Fishman informs them that Dr. Stein has taken over at leading physician. Dr. Stein brags that he's the best doctor in the county, and later upgrade it to state, then "Southern California".

However, his actions prove otherwise. He accidentally sutures some medical scissors inside Michael, and attempts to help Michael jump higher by shortening his calf muscles (after George Michael hits him with the Mercedes. He also helps reattach G.O.B.'s fingers that were cut off during The Sword of Destiny illusion at the Gothic Castle. ("Sword of Destiny")

Dr. Fishman: Because Dr. Stein here has already been assigned to his case. You’re lucky. He’s the best.

Dr. Stein: Well, only in the county, but I’m certainly good enough to take out that appendix of yours.

Lucille: I don’t buy it. It could be a hernia.

Tobias: Or it could be your colon. I’d want to get in there and find some answers.

Dr. Stein: Well, I am the best doctor in the state, but if you don’t trust my decisions...

Dr. Stein: I know, it’s pretty gross. It could heal on its own, but I say we go in there Dr. Stein style and cut it out. I want to show these interns what the best doctor in Southern California can do.

Dr. Stein: Your leg’s going to be fine, Michael. And I wouldn’t worry about getting hit by any more cars. I’ve shortened your calf muscles to theoretically increase your jumping ability. But if it works, I could be the best in the world.

Add a photo to this gallery
Retrieved from "https://arresteddevelopment.fandom.com/wiki/Dr._Stein?oldid=41011"
Community content is available under CC-BY-SA unless otherwise noted.