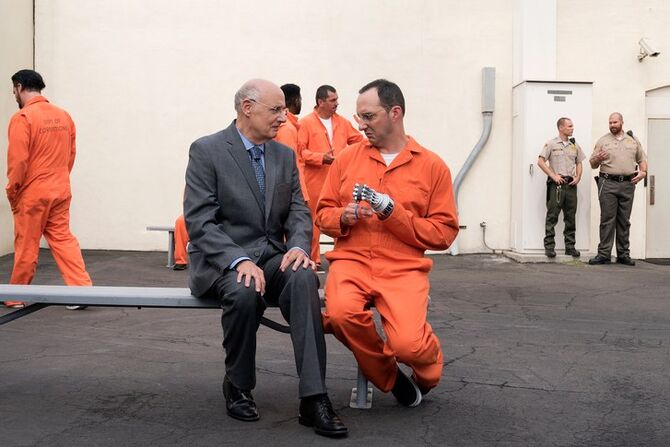 Michael attempts to bail out Buster. George Michael finally meets the Howards and Ron Howard informs Michael that his plans for the movie have changed.

Michael accidentally bailed out their lawyer Barry instead of Buster. Barry suggests getting the money to bail Buster out from George Michael. George Michael says that all of Fakeblocks money is tied up in legality and patenting. Lucille tells Barry that he better figure out how to get Buster out or else she'll use her lawyer George Snr. freaks out thinking that it's a divorce lawyer. Her lawyer's name is Dustin Rattler but she hasn't hired him yet. It turns out to be the guy from the Newport Bay Boys. She tells them that he tickles her fancy which causes G.O.B. to imagine horrible things. Barry tells her that she doesn't want to hire another lawyer because of the DA. Barry says that they have to stay away from the media and Michael agrees. Tobias asks if this is going to affect the scripted aspect and Michael asks why there would be a scripted scene in the first place. Tobias mentions his movie with Ron Howard and Lucille asks Michael if that's still happening. Michael says no but that he did give Kitty the releases. Lucille tells him to get them back. G.O.B. suggests that he go talk to Kitty and Tobias offers to come along but Lucille tells him to go find Lindsay. Tobias and Murphy decide to go looking for her. Maeby and George Michael talk in the backyard. Maeby tells him that she wants to make out again to teach them a lesson but George Michael says he can't because Michael still thinks that he's dating Rebel Alley.

Michael comes up and asks Maeby if Tobias revealing Murphy Brown to be his bastard son upset her. Maeby tries to play it off but is in fact jealous. Michael tells George Michael that he overheard him saying that Rebel didn't want him to meet her parents. George Michael says that he could just show up at the BBQ. Michael tells him to not to rush to fit into that crowd because they are probably looking for a suck up and that isn't George Michael's style. Michael tells him to just be himself if he does end up meeting them. Michael takes G.O.B. with him to meet Kitty to make sure that she doesn't make a movie about Buster. Michael says that he thinks that he and George Michael are going to be closer than ever since Rebel has lost interest in George Michael. George Michael goes to see Maeby at the retirement home to get relationship advice. He tells Maeby that Michael thinks that he should take things slower with Rebel. She convinces him to dye his hair pink to offend Ron Howard. Tobias and Murphy Brown head to Mexico to find Lindsay. Michael tries to get G.O.B. to get Kitty to give them back their movie rights. Michael pushes G.O.B. onto Kitty who is enamored with him. He leaves the two alone despite G.O.B.'s protests. George Michael shows up at the Howard's BBQ but instead of alienating them he fits right in with his new Howard red hair. He tries to get them to hate him by telling them how his fake company is going under but that just endears him to them even more. G.O.B. tries to get into the mood to be with Kitty but receives a call from Tony. Tony tells him that he's back in town and G.O.B. says that the should hang out but Tony says that it might taint his brand. Tony hangs up and G.O.B. asks Kitty how much of the conversation did she overhear. George Senior goes to visit Buster. He tells Buster that he needs to toughen up since he's in lockup. He also tells Buster that he and his mom aren't together anymore. George decides to end it and charges at a guard but instead of beating him up, the guard just hugs him.

George Michael tries to tell Rebel that his company is fake but she offers to loan him some money to keep it going. George Michael accepts since he knows that his family could use the money to bail out Buster. Maeby realizes that the relationship with Stan that was so confusing is because she saw him as a father figure. Tobias and Murphy Brown arrive to Father B's property which is where Tobias last saw Lindsay. Michael goes to the BBQ looking for Rebel but runs into Ron. He tells him how he doesn't want a movie being made about Buster but Ron says he's going to make a true crime series instead. Michael then runs into Bryce who tells him that Rebel is just using George Michael because of his internet company. Michael tries to leave unnoticed so he goes to the security room to watch the monitor to see when the coast is clear. Michael realizes a way to keep an eye on Rebel is to go ahead with the docuseries so he tells Ron that he can do it based on Buster. Michael goes home to the house where Lucille is waiting for him. He tells her about the tv show but Lucille doesn't like it. Michael says that this will help Buster because they can use it to convince the DA to release him.

Retrieved from "https://arresteddevelopment.fandom.com/wiki/Emotional_Baggage?oldid=54715"
Community content is available under CC-BY-SA unless otherwise noted.