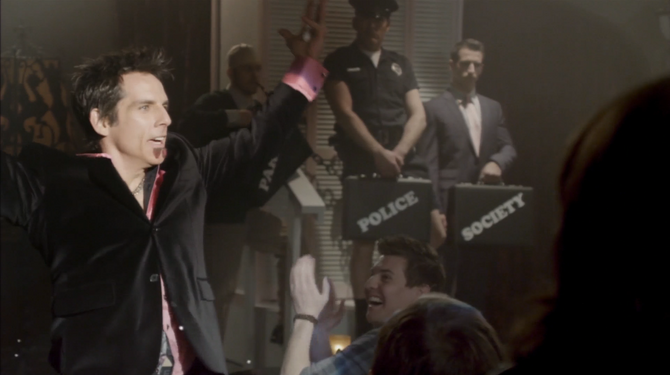 The Escape from the Closet illusion is Tony Wonder's signature act in his gay magician career.

Tony Wonder performs the Escape from the Closet illusion at the Schnoodle kick off rally held at The Century Plaza in early 2012. G.O.B. sees his props and tries to jam a podium closed but Tony pops out of a speaker instead. (4x7 — "Colony Collapse") Weeks later G.O.B. attends a performance during gay night at the Gothic Castle of Tony's show. He tries again to lock every container but Tony hid inside a beanbag chair. (4x11 — "A New Attitude")

Tony Wonder: A magician has many secrets. But there was one I was forced to keep by society. "Don't talk to us!" they said. "Keep your hands to yourself!" they also said.

Officer Taylor: Magic is only for straight men.

Father figure: I don't want to look at you son. Just go to work. Why can't you be like your brother?

Teacher figure: There. Stay in there. We don't want you out here.

From "A New Attitude"

Magazine article:The Newport Beach home of Tony Wonder - World famous magician and new icon of all Friends of Dorothy - has a waspy facade in keeping with the rest of this straight laced Southern California community, but on the inside it is literally a cabinet of wonders.

"Here you see my "Herman Gunt's Magic Box" Mr. Wonder informs me, snuggling up to a TARDIS-esque container. For like the famous Doctor, Mr. Wonder is a master of transformation. "It's the centerpiece of my stage show because it's a way to symbolize and summarize my entire journey from straight magician to the wold's best gay magician, at least the best magician who's out, am I right?" he says with a wink and a conspiratorial shoulder squeeze.

After more show and tell we sit down over tea and discuss his struggles with identity. "The biggest illusion of my career as a magician was pretending I was straight. Up until I came out it just felt like I was doing tricks. Now I can make real magic."

When asked if he had a moment of revelation and acknowledgement of his sexuality he paused for a long moment and reflected deeply, prayer hands resting on his twin pink soul patches. "When I saw that Malick movie, you know that one with Rebel Alley, and she says 'Are we... the same?' I wanted to stand up from my seat and shout: 'Same!' back at the screen. Because that's just what I've been saying since I was young. Same? Same! I just didn't know till then that it really meant same sex experience if not wholly the same." "Enlightenment can be a different entity for different people" says the master of the sweat lodge George Sr. "You never know what your true experience will be, but you will definitely have an experience and lose some..."

Retrieved from "https://arresteddevelopment.fandom.com/wiki/Escape_from_the_Closet_illusion?oldid=32295"
Community content is available under CC-BY-SA unless otherwise noted.