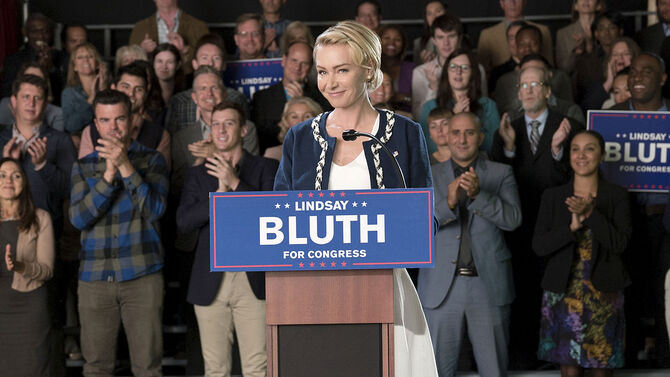 "Everyone Gets Atrophy" is the third episode of Arrested Development's fifth season.

The family unites behind Lindsay's campaign but Michael senses that something is amiss. Maeby has an idea that George Michael likes a little too much.

Michael learns that the whole family is in Lucille 2's apartment to film campaign footage for Lindsay, who is running for Congress. A couple of weeks ago in Mexico, while having lunch with Oscar, believing him to be George Senior, Lindsay got a call from her mom asking her to run for office. Lindsay, in turn, called Maeby and asked her to be her campaign manager. George Senior reveals that the family is getting an award for being Family of the Year. Well, the Bluth Company is basically giving it to them. Lucille 2's whereabouts are still unknown.

Tobias has dyed his mustache pink and put on a wig to play Michael. G.O.B. says it reminds him of Tony Wonder's pink W beard, and how his beard tickled him. Still in the closet, Gob is now dating Joni Beard, a former weathergirl and ex-wife of John Beard. She is hosting a talk show and will present the award to the family at the ceremony.

George Michael returns to America and finds the note left by his father. He leaves his house to go back to the model home where he grew up. He wallows in nostalgia and wears the muscle suit to flirt with a blonde at the pool. He also makes new Star Wars videos with fighting moves. While making cornballs, he gets a text from Maeby asking him to come to the penthouse. Maeby tells him about running Lindsay's campaign and how no matter how offensive Lindsay is she still goes up in the polls. She tells him about the Family of the Year award and tries to convince him to kiss her on camera in order to sabotage Lindsay's campaign. George Michael instead suggests that Maeby write a nice speech for Lindsay to read, which will praise her as great. Maeby twists that into part of her plan to humiliate Lindsay by showing up with meth teeth. George Michael says that's cruel, but Maeby says at least it's not punching her in the face. He feels guilty about his dad, and Maeby reveals that Michael and the rest of the family are across the hall. George Michael gets nervous.

Back in Lucille Austero's penthouse, George is depressed and Michael talks him down from the balcony. Lucille says that Lindsay is the only one who's getting a trophy because she's running for Congress. G.O.B. objects to that and Lucille tells him that she'll buy everyone a trophy instead. Michael points out that Buster is missing, although Tobias has an acting partner playing Buster badly. George says they don't need a Buster, and Lucille agrees that Michael has him. Michael denies this, and Lucille thinks he's lying. Unknown to them all, Buster is at the police station, having been brought in for questioning for Lucille 2's disappearance. Michael asks the family why they all came back to America and Lucille responds that they have an obligation to look after the company. Michael remains convinced they're merely hiding Buster to teach him a lesson.

Michael leaves but runs into George Michael in the hallway. They have an awkward conversation and Michael tells him that he's going on a scuba diving trip to which he sort of indirectly invites George Michael. They talk a bit about Rebel. Michael says that he dumped her but truthfully it was the other way around. George Michael can't bring himself to admit that he's only seen Rebel in the movies. George Michael goes to hug Michael as he leaves but Michael suddenly goes on the defensive and they use their fighting moves to keep apart. They both look at each other before George Michael's gets into the elevator and Michael heads back to the penthouse to get the bag he forgot.