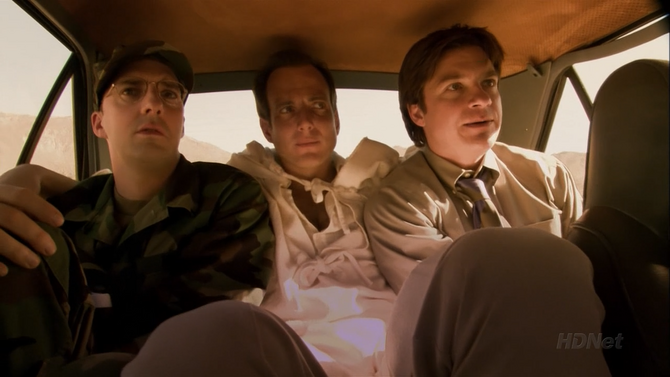 The Bluth boys find a web of mass deception in Iraq when Michael and Buster rescue G.O.B., who was imprisoned while on a USO tour. Meanwhile, George Michael plans a Sweet 16 surprise party for Maeby.

Michael Bluth was preparing his sister for her upcoming deposition in the case against their father. But she couldn’t focus on the task at hand, as she had a lot to drink the night before. So did Tobias, who was trying to fortify himself for a sexual encounter with his wife of many years. But Tobias had a low tolerance, so Lindsay finished the bottle of vodka herself, thinking vodka goes bad once it’s opened.

Tobias announced that he couldn’t be deposed, as he had been called by the prosecution, which had asked for old photos and documents. Tobias happily grabbed them from the model home's secret room and put them in a box, thinking that he was auditioning for a role on a new CBS drama.

In the kitchen, George Michael nervously told the family that Maeby’s birthday was coming up. He suggested throwing her a surprise party, an event he had already informed Maeby about after she complained that her parents probably didn’t even know her birthday was on the horizon. Tobias decided on the spot to go buy Maeby a present.

Then G.O.B. entered and informed Michael he was going to performing in a USO show in Iraq. Considering that their father was being tried for treason for building homes in Iraq, Michael thought this was a fairly bad idea. But G.O.B. insisted he was going, despite his brother’s protests and he’d been doing his Christian magic act, including his walking on water and wine into water tricks.

Later that day, Tobias met with Wayne Jarvis. Again, this was not an audition, despite what Tobias thought - something that Jarvis coldly reminded him of. Jarvis offered Tobias a deal if he could put George behind bars. But because Jarvis had panned Tobias’ acting, he angrily turned down their offer. But as he waited for the elevator, a flyer caught Tobias’ eye: an advertisement for a scrap booking class. He thought this would make a perfect gift for Maeby, not knowing the ad was actually a trap set by Jarvis.

Meanwhile, Michael went to confront his father about G.O.B.’s trip to Iraq. George explained that he needed a way off the hook. Buster took a coma, Lucille was taking Lindsay to rehab, he was running out of options. Michael complained that he would have to ask the prosecution for a delay, and then warned his family not to make a liar out of him by skipping rehab.

But Buster was finding his coma increasingly hard to withstand. His mother had been offering his body to doctors, dentists and beauticians in training to practice very painful technique on his supposedly unconscious body. But he endured it all for Adelaide, the nurse who fell in love with his limp form. When she told Buster she desired to hear him say anything, even if that would mean he was faking the coma, he said "anything". Adelaide slapped him, called him a coward and a faker and berated herself for allowing herself to fall in love with a comatose man. Buster tried to follow her as she ran off, but he hadn’t used his legs in three weeks.

And Michael met with Wayne Jarvis, assuring him that no family members were in hiding. Jarvis informed him that surveillance tapes showed that the two women who checked in to Shady Pines (an allusion to a fictional retirement home in the Golden Girls, for which show creator Mitchell Hurwitz also wrote) under Lindsey and Lucille’s names were clearly not his relatives. And Buster had made fifteen phone calls to radio stations while supposedly in a coma. Lastly, G.O.B. was in Iraq, being held in jail as an insurgent.

Michael had been called to sign Buster out of the hospital. Buster was despondent over Adelaide calling him a coward. Michael told him that he had to travel to Iraq to get G.O.B. out of prison. Buster begged Michael to let him come along. He could prove to Adelaide that he was a hero, and use his limited Army training and Arabic language skills to boot.

The depositions were delayed, but the prosecution was about to get a bagful of evidence, thanks to Tobias falling for their scrap booking sting. Meanwhile, Lindsay and Lucille were at a spa in the desert, avoiding both rehab and their depositions. Unfortunately, it was a dry resort.

Michael and Buster checked out of the hospital. Adelaide overheard Buster mention their trip to Iraq, which made her think Buster was a hero again. After saying goodbye to Adelaide, Michael and Buster went to leave for Iraq, on "Operation Hot Brother," as Buster called it. As they left, George was admitted to the hospital, now in a fake coma of his own.

George Michael, meanwhile, got a hold of Maeby’s address book to invite all of her friends to her secret Sweet 16. And the guys finally did get to Iraq, arriving at the prison the Americans were training the Iraqis to run. G.O.B. was thrilled to see his brothers. G.O.B. informed Michael that he was arrested for doing street magic. But what got him in trouble was doing "the late, great Jesus' biggest illusion, the 'Burning Bush.'" When the bush caught fire, the crowd began chanting “Burn Bush!” and soon it looked like G.O.B. was leading an anti-American rally.

G.O.B. confessed to Michael that George asked him to burn a few model homes in Sadr City if he had the time, but now he was ready to go. Michael told him he was deemed an enemy combatant, and perhaps wasn’t going anywhere for a while. But they were actually released quite easily, which aroused Michael’s suspicions. Michael then decided to go check out one of the model homes in question.

There, they found somebody the U.S. government had been able to depose, one of Saddam’s many body doubles who lived with many other body doubles. The men were quite polite, so Michael offered to fix their air conditioning. But first, he decided to see if this model home also had a secret room. It did, and inside, Michael found a bombshell: an actual bombshell.

Back at the American model home, none of the invitees showed for Maeby’s birthday party. George Michael still greeted, but Maeby thought she knew why. The invitations reading, “Guess Who’s Turning 16?” had exposed Maeby’s secret and cost her the studio job. Alone, they decided to have a drink, not knowing it was the fake wine from G.O.B.’s magic show.

Back in Iraq, the Bluth boys stared at the nuclear warhead in the secret room. And their American cab driver, who was actually an undercover CIA agent by the name of Richard Shaw, came in and busted them, which explained why it was so easy to get G.O.B. out of prison. In fact, they had given G.O.B. multiple chances to break out. Then one of the fake Saddams pointed out the warhead was a fake made by Homefill, the same company that made fake home decorations for the Bluth model home. But inside the hollow shell was a U.S. government tape recorder. Richard Shaw called Langley, where he learned the government got George to build houses in Iraq so they could wire them.

In Iraq, Michael finally learned that his father actually was a patsy, used by the government through a British building company, just like George had always claimed. Unfortunately, now that they knew that, the CIA agent was going to have to kill them. However, Buster had already sent cell phone pictures of everything to Adelaide. Michael hinted that the pictures would be kept secret if they were set free. Richard Shaw agreed to let them go, and now in a bargaining position, the Bluth boys were able to negotiate direct flights home, and that the treason charges against George would be dropped. And so, with Operation Hot Brother a success, our American heroes returned home. Mission accomplished.

Add a photo to this gallery
Retrieved from "https://arresteddevelopment.fandom.com/wiki/Exit_Strategy?oldid=54774"
Community content is available under CC-BY-SA unless otherwise noted.