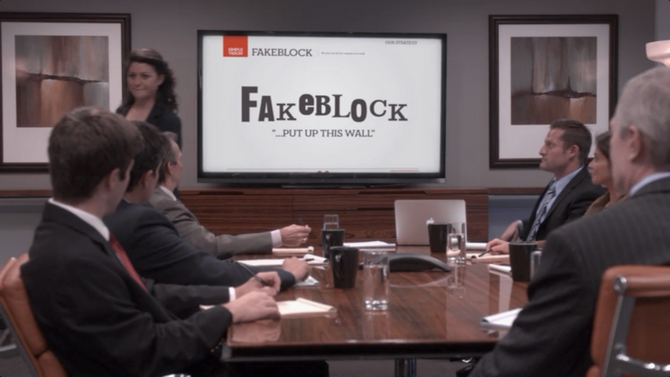 Fakeblock
Appearances: "Flight of the Phoenix", "A New Attitude", "Señoritis", "It Gets Better", "Blockheads", "Unexpected Company", "The Fallout"

Fakeblock is the software George Michael and P-Hound write while at UC Irvine. Maeby invests in it as a way to overcome her failure in the film business.

Shortly after Season Four premiered several fans released Fakeblock apps. In June Netflix released a functional version of the App on iPhone and Android devices, which unlocks images and videos if the player reaches a certain number of taps.

As a way to prove his love for the wood block instrument, George Michael and P-Hound build a wood block app for the iPhone. George Michael, meanwhile, is concerned about hurting his father's feelings for hinting he should move out of his dorm room, he says he needs privacy for his software and Michael misunderstands their conversations, thinking they're talking about privacy/anti-piracy software. Michael then shares his misunderstanding with Maeby, and George Michael lies to his father and Maeby to save face. ("Flight of the Phoenix") ("It Gets Better")

When Mort becomes successful with his Schnoodle internet startup, Maeby becomes jealous so she latches and brags about George Michael's Fakeblock startup. Rebel overhears and becomes interested in George Michael (but thinks his name is George Maharis.) George Michael accidentally makes it appear that he used Fakeblock to wipe out Schnoodle when in reality there was only a power surge. In addition, Maeby brags about her future at the Fakeblock company at her Opie Award speech, and she dedicates herself to hyping up the company up and invests her and Lucille Austero's money in it. But George Michael, in deep panic about his white lie spiralling rapidly out of control, fires Maeby (and Mort who got a job) from the company. ("Señoritis")

George Michael quickly realizes that he must keep up the Fakeblock con in order to keep Rebel, but it continues to get him into more problems. Tony Wonder overhears George Michael talk to G.O.B. about Fakeblock at the Gothic Castle and plans to strike it rich by stealing the software from him. ("A New Attitude") Meahwhile, P-Hound starts a lawsuit against George Michael for the ownership of Fakeblock, as he put out the money for the "first investment", which was 2.97$ to check out the competitors on the wood block app market.

At a keynote speech during Cinco de Cuatro, George Michael plans on revealing the truth about Fakeblock — that it doesn't exist — but then he finds a note taped to his microphone, telling him that he will get "screwed" if he publicizes Fakeblock. Thinking that it is a promise of sex from Rebel, he decides to continue the lie and tells the assembly that Fakeblock "is real". Unbeknownst to him, the note was actually a threat from the hacktivist group Anonymous, who sees Fakeblock as a threat because of its alleged anti-piracy capabilities.("Blockheads") 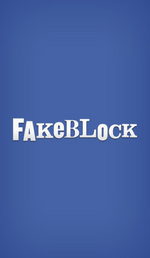 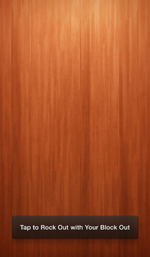