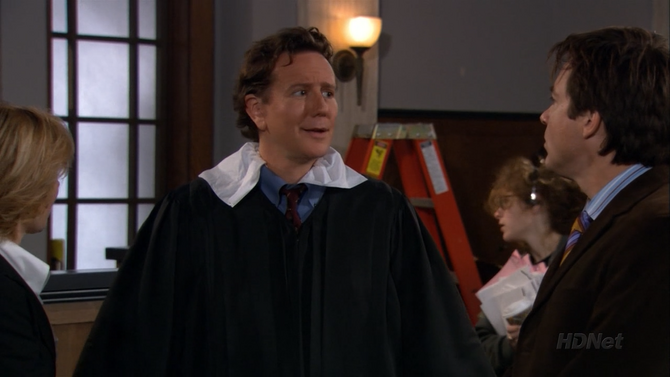 "Fakin' It" is the tenth episode of Arrested Development's third season.

Michael had received a witness list for his father's upcoming trial. The list included G.O.B.'s puppet, Franklin. The entire family was also on the list. Buster tried to pretend he didn’t know anything about the business, which was untrue because nightly, Lucille got drunk and told him everything. The list also included an N. Bluth, money having been found in an account under that name. Michael asked his father if he knew an N. Bluth.

So Michael met with Jan Eagleman, who was preparing for her new show, Judge Reinhold, a reality courtroom show starring Judge Reinhold. She wanted to conduct the mock trial on the set, which would give Reinhold some practice too. Jan told Michael that families that stick together fare the best in court, the suggested he handle the family's defense. Then Michael got a call that Buster was in a coma.

At the hospital, Lucille mentioned that she hoped Buster would coincidentally stay in a coma throughout the trial. Michael asked Lucille if she was responsible for this, but in fact, Buster got into G.O.B.'s forget-me-now pills. Coincidentally, Buster's hospital roommate was a woman who had been in a coma for two years now, a fact her son, Brian, lamented. Lindsay, hearing Brian say he had the resources to support a long hospital stay, quickly saw a potential boyfriend.

In the lobby, Michael scolded his parents for putting Buster under this stress, and informed them he’d be playing their defense lawyer in the mock trial. Hearing the name Judge Reinhold, Lucille opened one of the talking magazine ads promoting the show, a technology G.O.B. immediately wanted to use for Franklin. A doctor then approached the family and told them that Buster was in a very light, possibly fake, coma. But since he was fully insured, the doctor was willing to see how it played out.

The doctor then asked George Michael if he wanted to volunteer at the hospital, suggesting he join a group that put on fake weddings for Alzheimer's patients. He’d have to find a girl to do it with him, perhaps a cousin, even though it meant they would have to kiss. Suddenly, George-Michael was intrigued.

Later, Michael was preparing for the mock trial when Lindsay entered with the news that she had a date with Brian. Well, really she was joining him on a picket line demanding the right to pull the plug on loved ones. Then G.O.B. came down with Franklin 2.0, who had the talking magazine chip inserted in his body. Though he could only say “My name is Judge.”

Michael was more interested in the one bombshell the prosecution had, an undated blueprint of an Iraqi model home that matched their model home. Unfurling the blueprints, Michael noticed the Iraqi home had a secret room and wondered if his home had the same. While Michael searched for the room, G.O.B. took Franklin back to the hospital to swipe some more talking magazines.

Michael found that there was indeed a secret room, where his father had stored the family mementos, including a birth certificate for "Nichael Bluth." Michael worried that he was N. Bluth and was being set up to go to prison. Tobias stumbled into the secret room, which he seemingly knew about, judging from the stack of bodybuilding magazines in there.

In another room, George Michael was trying to convince Maeby to join his plan. She thought the kiss part was a little weird considering what they had been through, but eventually realized it would be a good twist on a wedding movie. At the penthouse, Michael showed his father Nichael's birth certificate. George claimed it was all a coincidence, then accused Michael of not being able to handle the family's defense.

Back at the hospital, Lindsay and Brian were protesting for the right to die. Tobias showed up and introduced Lindsey to a new friend he met at the gym, a Franciscan priest named Ben. Tobias and Ben were there to protest for the right to live on total medical support. And George Michael and Maeby were inside having their first mock wedding. Maeby did the thing she always thought was so corny and ran away.

Michael returned to his office to find G.O.B. with Franklin. Oh, and his desk was overturned. G.O.B. said he was practicing his outraged testimony. Also, he had a new trick for Franklin. Hearing a doctor speak instructions into a tape recorder, G.O.B. stole the recorder in put it inside Franklin. Michael took Franklin and headed back to the hospital, where he was visited by Wayne Jarvis, the real prosecutor. Jarvis warned him that, thanks to the Patriot Act, whatever was said in the mock trial was legally binding. Jarvis told Michael that if he didn’t get his father on the stand, the government was going after N. Bluth, whom they suspected was Michael.

Maeby was hiding in the secret room, where George-Michael found her. He tried to cajole her into the kiss, and just as he made some headway, Michael barged in looking for some evidence. At the hospital, Lindsay and Tobias argued over their marriage when Buster sat upright, yelled at them to fake it, then fell back into his coma.

The next day, the mock trial began on the renamed Mock Trial with J. Reinhold. The Bluths pretended to be a family that sticks together. Then Michael called a surprise witness to the stand, Franklin Delano Bluth. Touched, G.O.B. eagerly took the stand with his puppet friend. Michael announced to the court that he was approached by the prosecution and asked to implicate his family, then instructed G.O.B. to press play on the recorder inside Franklin.

G.O.B. did, and a tape of Wayne Jarvis telling Michael they would go after N. Bluth played. Judge Reinhold declared a mistrial. George asked Michael why he didn’t save it for the grand jury, and Michael said he was going to. Although truly, he didn’t know that's what you’re supposed to do. Jan Eagleman complimented the family on their cohesiveness.

At the same time, George Michael and Maeby were going through with the fake wedding for hospital patients. Not knowing that the doctor was called out and Father Ben had stepped in. And that's how the kids got married.

→ See more quotes from "Fakin' It" at Transcript of Fakin' It.

Retrieved from "https://arresteddevelopment.fandom.com/wiki/Fakin%27_It?oldid=54772"
Community content is available under CC-BY-SA unless otherwise noted.