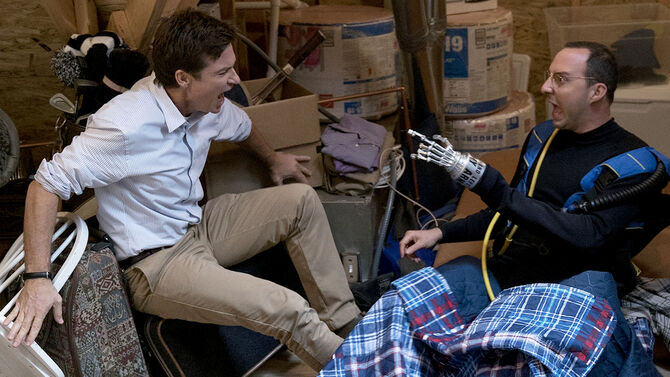 Months after Cinco de Cuatro, Michael is working at a web search company and is making friends and staying busy.

Months earlier, two mornings after Cinco de Cuatro, Michael leaves the model home but is told by Steve Holt, fumigating the house for his Steve Holt! Pest Control business, that someone is in the attic. Michael reminisces about failed scuba trips with his son George Michael and is startled to find his brother Buster in scuba gear in the attic. Buster explains that Lucille told him Michael would take care of him. Michael says he has too many problems of his own and leaves.

Outside Rebel's apartment, moments after George Michael punched Michael in the face for knowingly sleeping with his girlfriend (4x15 — "Blockheads") the father and son swallow the awkwardness and pretend as if nothing happened. Michael returned to the penthouse where he left a note for Lucille 2 telling her that he's sorry he missed her, while simultaneously on a call with her ignoring every word she said. He meets Lt. Toddler who is inquiring if Lucille 2 is home. Michael leaves his son a voicemail telling him that Rebel doesn't know that they are father and son. He goes to leave the penthouse but is again questioned by Lt. Toddler who is looking for Lucille 2, who hasn't been seen since Cinco. Michael tried to charm her and distance himself from Lucille 2 but an unphased Toddler asks him a series of questions about the redhedded woman in the Bluth penthouse (who was George wearing Lindsay's red wig) and Lucille Bluth and Tobias's whereabouts. Michael awkward babbles through both answers and leaves, deciding to report Buster as a missing person as a method of getting Lucille (Bluth or Austero) to take care of him again.

George Michael calls Maeby who's in Lucille Austero's penthouse cleaning up any evidence that she was there having sex with Perfecto Telles. She convinces the maid to swap clothes with her so that she can leave the building without being discovered. Maeby goes to meet with George Michael who hands her a cup of coffee. He tells her that he punched Michael and that he doesn't know what to do. Maeby tells him that she told Michael about Rebel having a boyfriend because she hoped something like this would happen. Maeby also tells him that he should call and apologize to him because it'll make Michael feel horrible. George Michael gets a call from Michael but declines it.

Meanwhile in Mexico, G.O.B. attempts to buy forget-me-now pills to forget his tryst with Tony Wonder but is interrupted by his father George arriving. They two pretend to be super-machismo and agree to party their way through Mexico.

Lindsay at the border

Lindsay attempts to pass the border in her limousine.

...on the next Arrested Development

"Lindsay arrives at the border she had just called for a wall to protect. Lindsay is proud that she thought to include her driver . And Lucille and her therapist arrive at their beachside casita."

Retrieved from "https://arresteddevelopment.fandom.com/wiki/Family_Leave?oldid=53766"
Community content is available under CC-BY-SA unless otherwise noted.