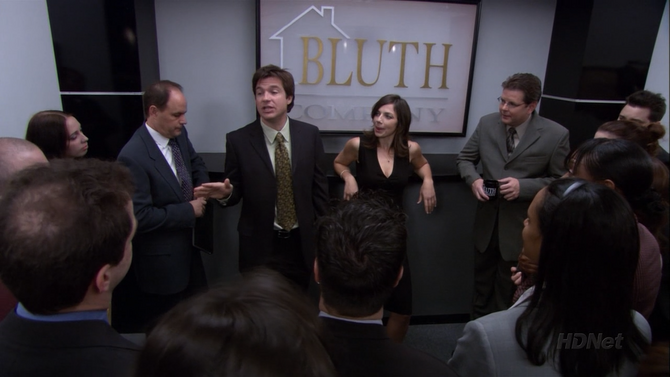 When Michael hires a woman who may be his sister, her services might be just what the company needs. Meanwhile, Buster's coma attracts the attention of a politician.

After finding a picture of himself as a baby with a girl named "Nellie", Michael Bluth believed he had made a shocking discovery. While showing it to Lindsay, he theorized that their parents had given up Nellie years before and were now trying to pin the family's crimes on her. He believed her to be the mysterious "N. Bluth". During the discussion, Tobias enters the kitchen ready for a day at the gym, in hope of bulking up so that Lindsay would find him more attractive. The two had made an awkward attempt at love making the night before, but Tobias' lack of masculinity was a turn-off for Lindsay, and Lindsay's lack of masculinity was a turn-off for Tobias. They decided to take some time off, and try again in thirty one days, but not before exchanging a list of "cant's" and "wont's".

Upstairs, George Michael was breaking the news to Maeby that their fake hospital wedding had turned out to be a real one. She wanted to tear up the marriage certificate that George Michael had received in the mail, while he wanted it framed.

Michael decided to find out more about Nellie, so he went to see his parents. He entered Buster's room, where he found George surrounded by computer equipment from the Bluth Company's office. Michael was worried that George was in the midst of one of his "Black Friday" firing sprees. In actuality, George was trying to delete the hard drives on the company's computers with an electromagnet. While there, Lucille complained to Michael that she knew Buster was faking his coma. Buster, was indeed faking his coma after falling for his nurse. Michael, bent on finding out the truth, asked his parents if they knew about a Nellie Bluth. Unfortunately for Michael, the only "Nellie" they knew was Tobias.

So Michael returned to an office full of old computers and paranoid employees. He assured them that, although they hadn't received pay, they would not be fired. Looking through the old machines, Michael found an old Kay-Pro computer containing what he believed to be information on his missing sister. Unfortunately, Tobias arrived from the gym dripping with sweat and shorted the PC out. Michael was upset, and unable to copy Nellie's phone number from the unit. Luckily, Tobias informed him that he could hit the "print screen" key and print out what ever had been showing on the screen. Tobias then told Michael that he is attracted to the female trainer at his gym, who is also named Michael.

While visiting Buster in the hospital, Lucille finds Rep. John Van Heusen standing besides Buster's bed, protecting his right to life. He claims to have been tipped off by someone who wanted to save Buster. That somebody was Buster himself, who made the call earlier that day.

Michael, meanwhile, was still searching for Nellie. Eventually, he found Frank, an acquaintance of Nellie's, who set up a meeting between the two at a hotel bar. When Michael met Nellie, he found that he had a connection with her that he never had with another member of his family. Unbeknownst to Michael, Nellie was not his sister, but a prostitute.

And so, the next day, Michael introduced Nellie, to the company staff. They were not happy to have her join the company, as they still hadn't been paid. Michael encouraged his employees to take full advantage of Nellie's "expertise". And as Michael left for more important business, Nellie made clear exactly what kind of work she would be doing for the Bluths.

With George Michael trying to make his fake marriage work, Michael got an update on how Nellie was working out. Michael planned to tell Nellie that he thought she was his sister over drinks that night. Lindsay would also be having drinks, but with a man other than her husband.

Michael arrived for his meeting with Nellie, only to find Tobias at the bar. Tobias was waiting for his trainer, "Michael". Michael arrived and realized that the girl "Michael" Tobias was there to meet was actually a man. Michael went upstairs, where Nellie confessed that she was mildly attracted to him. But it was a set up for Michael to be confronted by her pimp, Frank. Michael, recognizing the pimp's voice, turned on the lights, discovering that Frank was actually Franklin, voiced by his brother G.O.B. He informs Michael that Nellie is a prostitute, and Michael reveals that he thinks she is their sister. Downstairs at the bar, Lindsay arrives for her date, to find Tobias sitting there with fitness trainer "Michael", whom she was also there to meet. Fitness trainer "Michael", was under the assumption that the two had wanted a "Holy Trinity".

So Michael confronted his father about Nellie. George insisted that Nellie was his prostitute, not his daughter. Upon hearing that Michael and since gave Nellie access to the N. Bluth account earlier, he rushed to his computer and tried to close the account. But it was too late, the account had already been emptied.

The next day, Michael headed to the office to tell the employees that they would actually be fired. Fortunately for Michael, Nellie had used the money from the N. Bluth account to pay herself, the employees and upgrade the company’s computers. It was only embezzlement if the money was spent outside the company, she told Michael. Impressed by her handling of the situation, Michael offers Nellie a job at the Bluth company. But Nellie declines. After all, she made three hundred thousand dollars last year.

Add a photo to this gallery
Retrieved from "https://arresteddevelopment.fandom.com/wiki/Family_Ties?oldid=54773"
Community content is available under CC-BY-SA unless otherwise noted.