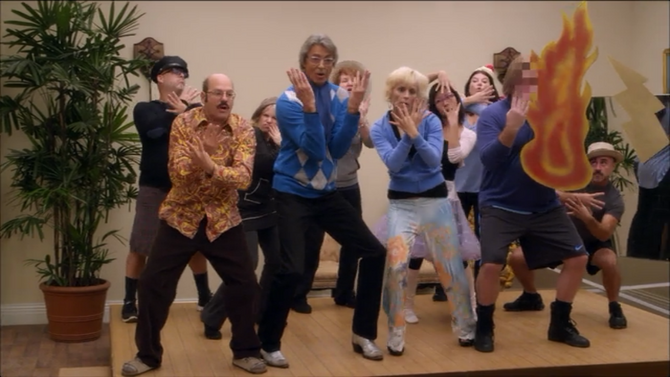 Fantastic 4: An Action Musical is a musical adaptation of the Fantastic 4 comic book characters written and directed by Tobias Fünke with songs by Mark Cherry.

Tobias writes the play as a way to spend time with DeBrie Bardeaux while working at Austerity. He casts DeBrie as Sue Storm, Emmett Richter as Johnny Storm, Argyle Austero as Mr. Fantastic, himself as The Thing, and Lucille joins the performance as a villain of the show. ("Queen B.") The show isn't very good, but Tobias and Argyle think it has potential so they ask Lucille Austero to invest $700,000 in the show. They perform it at Cinco de Cuatro but DeBrie drops out and Tobias tries to take her spot but gets on the wrong boat. In an attempt to get someone to fill in the role as the Thing, Tobias hands the costume to Buster ("Smashed"), but Buster leaves the costume behind by the Chicken Dan's stand after punching Herbert Love out cold. ("Off the Hook") In the end, the musical is performed without a Sue Storm or a villain and it is left ambiguous who ends up playing the Thing, who in Season Five is confirmed to be Gene Parmesan.

Retrieved from "https://arresteddevelopment.fandom.com/wiki/Fantastic_4:_An_Action_Musical?oldid=53189"
Community content is available under CC-BY-SA unless otherwise noted.