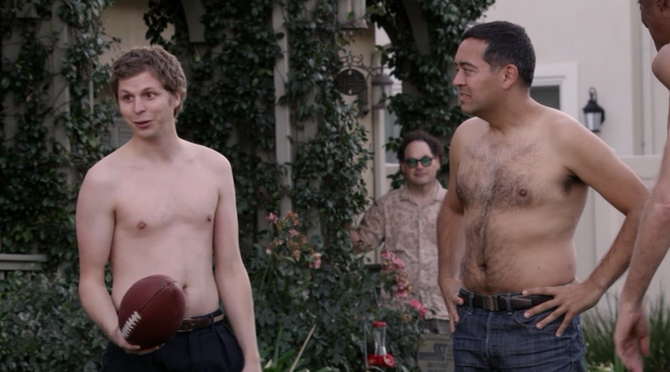 "Fast Company" was the nineteenth episode of chronological re-cut of Arrested Development's fourth season. It premiered on Netflix on May 4, 2018.

After falling out with P-Hound, George Michael gets new neighbors who really like hanging out with him. Maeby kicks Fakeblock into high gear.

Months earlier, George Michael is still living in his dorm and P-Hound is angry about Fakeblock and that he is being kicked out for the evening because George Michael has invited a Rebel over. P-Hound leaves and Rebel arrives shortly after. George Michael has a chance to tell her the truth about Fakeblock but lies instead because he wants to impress her. In the meantime, P-Hound filed a complaint with student housing and there must be a vote with P-Hound, George Michael, and Dean and Doug Fleer. The vote is split and more twins join the vote but the vote remained split. After the dorm became full of twins, George Michael asked to just bring one extra person in for the vote and not twins. The twins who were already in the room are angered by this, believing that George Michael hates them and so they voted him out of the dorm.

Outside, George Michael is almost hit by G.O.B.'s limo and G.O.B, who was looking for him, tried to force-feed him a Forget-Me-Now wrapped up in bologna. He failed and G.O.B. explained that he wanted George Michael to forget the time they spent together at the Gothic Castle. George Michael promised that he won't mention it and then he tells G.O.B. that he was now homeless. G.O.B. offered to sell him a Bluth model home and says that Michael would be disappointed if he didn't by one.

George Michael moved into Sudden Valley and he was welcomed very warmly by his neighbors. However, George Michael didn't realise that they are all sex offenders who liked him because of how young he looks. George Michael thought he should invite Rebel to his new neighborhood.

Meanwhile, Maeby was becoming richer by continuing to sell an unknowing Lindsay to Herbert Love. Maeby used this money to buy an office for Fakeblock and Lucille 2 helped with the money too. Maeby invited George Michael to the Fakeblock offices and, although he didn't know who Lucille 2 is, George Michael got her old car.

This led up to the party at Sudden Valley with George Michael, his neighbors, and Rebel. George Michael surprises Rebel with his new house. While they talk, Rebel's son Lem goes outside to the swimming pool and all the neighbors immediately disappear. Rebel explains that Lem only lives with her during March and April but she doesn't want to get serious with George Michael, or her other boyfriend, anyway.

At Balboa Towers, Maeby bumps into Michael and he asks for her signature for his movie. Maeby signs the form and finds out that Michael is dating Rebel Alley. She reveals that she knows who the other man is, although she doesn't say who, and tells Michael that she is dumping him. Maeby advises that he shouldn't take the relationship too seriously although she only really says this in order to sabotage George Michael's relationship with Rebel.

Michael arrives at Rebel's apartment and apologies for taking things to seriously. They resume their relationship and Michael wants a photo of them together. He can't take a photo himself so he secretly takes the picture from the photo booth. He leaves and discovers the photo is actually Rebel with her other boyfriend, George Michael.

On the next Arrested Development: Fateful Consequences... Michael removes Maeby from the movie when he realises that she knew about George Michael also dating Rebel. Meanwhile, P-Hound sues George Michael over Fakeblock because he put the first 99 cents into the project. Barry advises that George Michael should take to the sea.

This episode is made up from 7 episodes of the original cut of Season 4. Because the re-cut is chronological and combines the characters' stories into one narrative, new narration was recorded and there is even some additonal dialogue. These changes, as well as which scenes appear in which original episode, are listed below: