For British Eyes Only 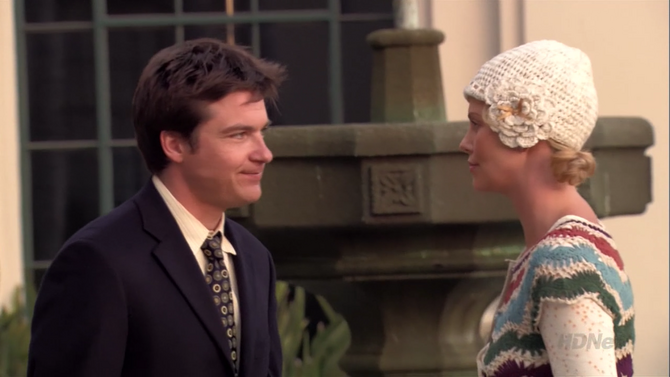 "For British Eyes Only" is the second episode of Arrested Development's third season.

Investigating his father's claim that a British group set him up, Michael goes to "Wee Britain" and is smitten with a beautiful woman named Rita. Lindsay attempts to seduce the new family attorney, and G.O.B. goes to extremes to avoid his newly discovered son.

Michael Bluth and George Michael Bluth are having a last chance camp-out in the cabin before it is due to be moved. While they are sleeping, a returning George drives the cabin away for use as an escape vehicle. When he catches up with his father, Michael doesn't return his father to prison, but instead arranges for him to be placed under house arrest. Michael visits the penthouse and Lucille informs him about her reinvigorated sex life thanks to the reappearance of her husband, but they are interrupted as G.O.B. enters with one of his illusion props, a giant cage.

G.O.B. describes his plan for the 'Free Bird' trick, planned as an attempt to entertain his father, but Michael tries to get G.O.B. to spend more time with his newly discovered son, Steve Holt. Meanwhile, Tobias has painted G.O.B.-like hair on his head with permanent pen in an attempt to convince G.O.B. that he should be the look-alike for the performance of the illusion.

After briefly escaping from Lucille's clutches, George explains his plans for his trial to Michael, and Michael tells his father that he should plead guilty. George claims that he was set up by British builders in regard to his involvement in building houses in Iraq. After Michael's family make fun of him for his lack of a love life, he sets off to find evidence for George's claim that the Brits are involved in his predicament, and if he doesn't find any, he tells them that they will be pleading guilty.

Lindsay tries to argue with Michael that her getting a new car would be a fair exchange cost-wise for her dropping the divorce case with Tobias, but Michael instead gives her the cabin car, much to her chagrin.

Michael drives to the British district of Orange County, named "Wee Britain", in order to check records. As he is not British, Michael is turned down for inspecting the records and he also misses the chance to pick up the records in exchange for a bribe.

Michael enters a pub across the street, and happens across the beautiful Rita. Upon finding out that she is British, he tries to employ her in order to access the files that would shed light upon his father's involvement in Iraq. Michael misses gaining access to the files due to the records office working on GMT, but he does arrange a date with Rita. As Michael drives away from Wee Britain, he calls Lindsay in order to gloat that he has a date, but the call is interrupted by a man in a convertible car swerving into the stair car. The man (Trevor) threatens him with regard to his interaction with Rita. He misinterprets the threat, thinking it has to do with the search for information regarding his father.

Michael returns to the Bluth Company office. G.O.B. is conflicted over his feelings about his son, Steve Holt, and Michael starts to believe that he is being set up by his father. Michael visits George, who denies that he set up his son, and then goes to cancel his date with Rita at her school. George tries to convince G.O.B. to include him in his illusion in order to escape before the trial, and Tobias has had hair plugs implanted in his head in order to look more like G.O.B. for possible use as his double in the illusion, but his scalp is bleeding horribly from the treatment.

As the family arrive at the courthouse for George's trial, G.O.B. is performing his illusion, now renamed 'Free Chicken'. Steve Holt and G.O.B. bond over their mutual love for magic. Tobias has now managed to involve himself in the illusion. During the confusion George tries to escape but Lucille uses a taser to stop him. In court, Michael pleads not guilty on behalf of his father. Rita turns up at the courthouse, and Michael decides to be brave and asks her out on another date, and goes back for a kiss. Rita joins the threatening Trevor in his car and they drive away.