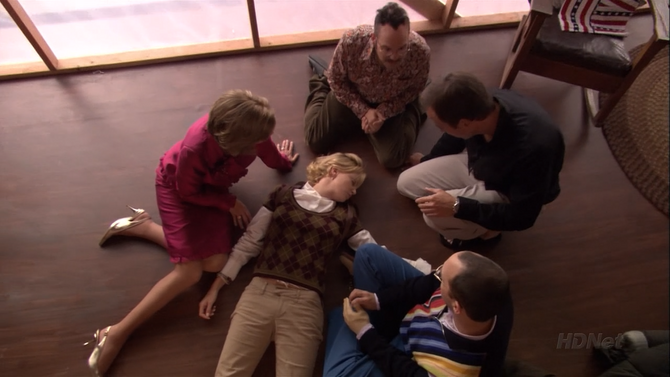 "Forget-Me-Now" is the third episode of Arrested Development's third season.

Michael, G.O.B., Lindsay and Tobias are meeting with the family's new attorney, Bob Loblaw, at the model home regarding the family's legal situation. Lindsay finds an opportunity to be flirtatious with the new lawyer and Michael expresses his anxiety about the amount of damning paperwork in existence. George, still under house arrest at Balboa Towers, has thwarted Michael's plan to keep him out of the meeting by sending a surrogate in his place, wired up to repeat George's words and to transmit video back to him. While Bob takes a call, Lindsay and G.O.B. are disbelieving about Michael's upcoming date with Rita, who is shown to be working with the sinister Trevor.

In an attempt to avoid her crush on George Michael, Maeby has begun to date Steve Holt, claiming they are getting serious. George Michael interprets this to mean Maeby has become sexually active with Steve Holt, replying that he is happy for her, since older guys have certain expectations.

Back at the meeting in the model home, Bob Loblaw emphasises the danger of the British evidence. George suggests shredding the paperwork, but the straightforward Loblaw informs him that it would be a felony to do so.

After Loblaw makes a swift exit, Michael's pressuring of G.O.B. to spend time with his newly found son, Steve Holt, is heard by George Michael, whose incredulity is met with flying aggression from his Uncle G.O.B., an action borne out of confused rage.

Michael meets up with Rita in Wee Britain for the date, which she has chosen to site at an American-themed restaurant. As Rita tucks into the large portions, she and Michael exchange info about their troubles finding a member of the opposite sex, but Michael is distracted by a looming Trevor. Michael tries to dissuade Rita from her wish to meet his family as he recalls their sabotage attempts during other recent dates, and instead tells her that he doesn't have a family. As they leave, Michael gets hit by the Merry Poppuns tourist attraction again, and Rita is under pressure by Trevor to get invited round to Michael's house.

Michael goes back to work at the Bluth Company offices and finds G.O.B. shredding the evidence, under instruction from his father via the surrogate. Michael stops G.O.B. and tells him to put the evidence somewhere that their father can't get to it. Lucille has arrived at the office to go on a date with George, as filtered through the surrogate, and Buster has arrived with a newly won medal, though he knows not what it is for. Tobias tries to persuade Buster to submit to his newly recalled analyst/therapist skills, or an 'analrapist', as Tobias previously had established himself.

George is formulating a plan for escaping the ankle monitor confines after seeing a bunch of balloons elevating a person on TV, and as this is garbled through by the surrogate, excuses the need for balloons as a catering item for a quickly thought up party for the medal-winning Buster. Michael sees this Balboa Towers-based party as an opportunity to bring Rita to what would be an empty model home, escaping any possible interaction with his family members.

Lindsay is continuing her flirtatious targeting of Bob Loblaw, but Loblaw's matter-of-fact language is mistaken by Lindsay for a returning of her affections. As Michael checks the house for absence of family members, he is frustrated to find Tobias and Buster still there and surrounded by the Bluth family evidence files. Upon noticing family photographs stuck up on the wall, he also realises that Tobias is there and trying to give Buster a therapy session in his own unique way.

Maeby becomes slightly unnerved by the physical expectations of her faster moving relationship with Steve Holt, and tries to cancel their date. Instead, Steve Holt wants to come to the empty model home. Not knowing what to do, Maeby agrees. Meanwhile, George Michael dithers about the knowledge of Steve Holt's paternity but eventually blurts the information out to Steve.

At Balboa Towers, Lucille is preparing for Buster's party as he and Tobias arrive. Buster and Tobias's misinterpretation of Michael's motivations in clearing the house convinces the rest of the Bluths that Michael is shredding the evidence and sacrificing himself by doing such an illegal activity. The family's new-found sense of gratitude towards Michael manifests itself in a misguided attempt to help Michael by picking up Rita for their date, and converting Buster’s party into one in her honor.

Michael is back at the house trying to conceal the evidence in the garage and in the car, but picks up a message from G.O.B. telling him of the family's new good intentions. Lindsay and the cabin car are already on their way to picking up Rita from the school, and when Rita enters the cabin, she feels somewhat threatened by the sudden appearance of people introducing themselves as Michael's family, considering that she had been led to believe that they did not exist. Buster suddenly notices Rita's seal backpack, and the recollection of his seal attack leads him to fly in a frenzy at Rita and knock her to the ground.

Rita is lying unconscious but G.O.B. believes that he has a solution to the panicked Bluths' problem: a temporary 'forgettiness' pill called Forget-Me-Now that he uses in his magic act to make subjects forget how the trick is done. Tobias recognises the pill as being a rohypnol pill, and the family panic yet again and dump Rita on a bench by the side of the road. An unknowing Michael is preparing a romantic table-setting for his date with Rita, and dashes off to pick her up, leaving the prepared table.

Steve Holt arrives just after Michael leaves, planning to end his relationship with his cousin. However, Steve Holt assumes Maeby prepared the table, Maeby is still too worried about letting him down to break things off.

Michael finds that he has missed Rita, and so calls the family to tell them that he is coming to the party. On his way, he happens across a drowsy Rita on the bench, and picks her up. Upon arrival at Balboa Towers, an overly friendly family, bred out of guilt, greet Michael and show him their hastily scrawled 'Family Love Michael' banner. Rita suddenly enters, but the guilt felt by all the Bluths is quickly dissipated as Buster bursts in to tell them that by accepting the medal, he was unknowingly re-enrolled for army duty.

As Michael admits his lie about his family to Rita, Rita leaves, and the family briefly feel superior. The feeling of moral superiority is short-lived however as G.O.B. blurts out what happened with Rita and the rohypnol, but tries to shove a forget-me-now down Michael's throat as a way of covering it up. Buster decides to fling his medal away, over the balcony, but it hits and sets fire to the balloon bundle that George is using to float down to the ground, evading the ankle monitor detectors. George thuds to the ground and is swiftly caught by waiting policemen.

Maeby leads George Michael to incorrectly believe that she and Steve Holt have had sex, and so a shocked George Michael tells her that Steve is their cousin. George's crashing balloon fire had caught on to the files that Michael had hidden in the car, which had been parked outside. As Michael tries to reassemble the files, he makes up with G.O.B. after finding out the good intentions behind the family's dealings with Rita.

Retrieved from "https://arresteddevelopment.fandom.com/wiki/Forget-Me-Now?oldid=54765"
Community content is available under CC-BY-SA unless otherwise noted.