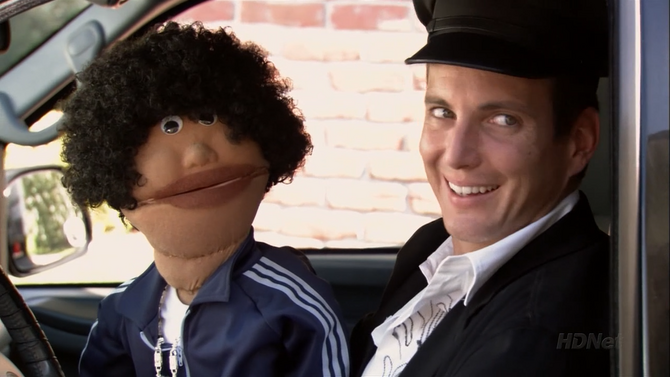 In an effort to "hip" up his magic act, G.O.B. briefly introduced a puppet. G.O.B.'s portrayal of Franklin was met with shock and violence because G.O.B. assumed he could portray an ignorantly stereotypical wise-cracking African-American. G.O.B. is also a terrible ventriloquist and always moves his lips when Franklin speaks. Aside from being obscenely racist, Franklin is blantantly offensive to his audience. G.O.B. dropped him from the act because:

Michael: G.O.B., weren’t you also mercilessly beaten outside of a club in Torrance for that act?

G.O.B.: He also said some things that African-American-y wasn’t ready to hear either.

Despite being a puppet, Franklin is treated as a real person by people around him. For example, a security guard treats Franklin with respect and the police regarded him as threat despite being immobile at the vehicle. ("Meat the Veals") When recording his album, Franklin is given his own microphone. ("Righteous Brothers") Franklin is called to the witness stand in a mock trial and is later given the job as bailiff in Bud Cort. ("Fakin' It")

Additionally, his personality carried over to whomever is puppeting him. G.O.B. puppets him most of the time, but when Buster uses Franklin as a replacement fake hand he says outrageously rude things to Lucille, which is uncommon for Buster. George also makes Franklin say racist things, directed at himself. ("Meat the Veals")

Aside from being a part of G.O.B.'s magic act, Franklin and G.O.B. also record an album Franklin Comes Alive. ("Righteous Brothers") Franklin gets a job as a bailiff on TV's Bud Cort. ("Fakin' It") Franklin also works as Nellie's pimp. ("Family Ties")

When Oscar throws an anniversary party for Lucille and George, Lucille tells G.O.B. that she doesn't want one of his "stupid puppet shows". G.O.B. retrieves Franklin from the model home attic despite his mother's warning, and discovers George. George tasks G.O.B. and Franklin with kidnapping Lucille from the party so George can renew their vows. At the party, G.O.B. puts ether on Franklin's mouth and knocks out Lucille and Buster, and unfortunately himself. At the Church of the Good Shepherd the police arrest Franklin for Lucille's kidnapping. ("Meat the Veals")

Franklin was present at one of the Bluth family's better parties, when they all got drunk out of fear before telling Lucille she had an alcohol problem. Michael wore Franklin's wig on his head. ("Spring Breakout")

Michael unwittingly funds Franklin Comes Alive, a CD of duets between G.O.B. and Franklin. To thank Michael, G.O.B. kidnaps George via an ether-soaked Franklin to turn him into the police. While driving the stair car to turn in his father he discovers Michael never listened to the album and changes his mind. Later, G.O.B. washes Franklin at a laundromat (presumably to get the ether out) but accidentally dried him for too long until Franklin was puckered and white. ("Righteous Brothers")

To cheer Michael up, G.O.B. and Franklin sing "It Ain't Easy Being White". ("Forget-Me-Now") While searching through G.O.B.'s magic props for something he can use to escape the Balboa Towers penthouse, George finds Franklin stored in a tub. ("Prison Break-In")

G.O.B. gets Franklin "into the system" as a way to get him some press and he is called to testify in George Bluth's trial. Franklin is re-dyed and rested and G.O.B. searches for a new way to make him speak, since he struggles to keep his lips still. He tries using Judge Reinhold talking magazine ads that say "My name is Judge" but decides on stealing a doctor's tape recorder. Michael secretly records Wayne Jarvis bribing him and calls Franklin to the stand during their mock trial in Mock Trial with J. Reinhold to get the case called a mistrial. ("Fakin' It")

After hearing of a mysterious "Frank" that's been threatening people about Nellie, Michael discovers that G.O.B. and Franklin have been acting as her pimp. (They met her as clients, but G.O.B. just cried and used her as a therapist.) ("Family Ties")

George: She wants her man back.

Franklin, by George: Yo, man, you’re going to get your sorry white ass thrown in jail.

George Michael: Is Franklin going to be there?

George Michael: I just don’t want him to point out my “cracker ass” in front of Ann.

Franklin, by G.O.B.: I ain’t kissing that old bitch.

George: That’s my wife, you bastard!

Franklin: It ain’t easy being brown.

G.O.B.: All this pressure to be bright,

Franklin: I got children all over town!

Franklin, by Buster: I don’t want no part of your tight-ass country-club, you freak bitch!

Retrieved from "https://arresteddevelopment.fandom.com/wiki/Franklin_Delano_Bluth?oldid=47987"
Community content is available under CC-BY-SA unless otherwise noted.