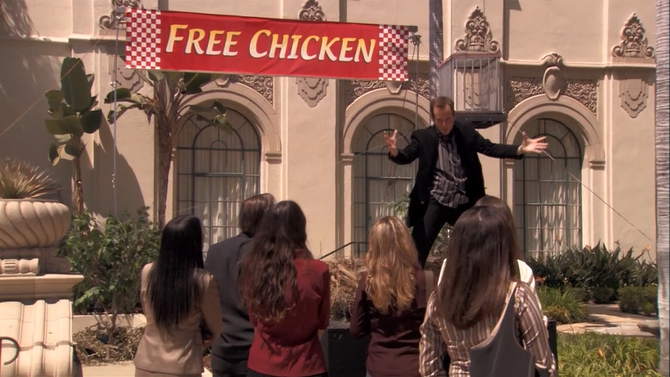 The Free Chicken illusion is performed by G.O.B. at the courtyard of the courthouse as a protest against his father's continual persecution by prosecution. It was a ploy arranged by George Bluth to attempt to flee custody again.

After being put under house arrest, George asked G.O.B. to perform a magic act as form of protest. Secretly, the illusion was designed to help George Bluth escape from custody. G.O.B. wanted to call it "Free Bird" but he couldn't get the rights to the name from Lynyrd Skynyrd. Tobias, still aspiring to be an actor, tried to convince G.O.B. to be the lookalike in the cage. He first drew hair on his head with a magic marker before getting hair plugs.

Prepping for the illusion, and mocking Michael's love life, got the Bluth family in the mood to simultaneously perform their Chicken Dances.

The set-up had G.O.B. standing on a large bird's nest with a seemingly empty cage hanging behind him. A "Free Chicken" banner was likely the reason for the large crowd. G.O.B. asked for a volunteer from the crowd. The plan was for George to volunteer, dress in a chicken suit and then be magically teleported into the cage. In truth, Tobias was in the cage, behind a mirror, also dressed as a chicken. A trap door in the nest would deliver George into the sewer where he can make his escape.

It was a genius plan. It didn't work.

When George volunteered, G.O.B. discovers that his own son, Steve Holt, was in the crowd. Wanting to prove himself to his son (and to escape from his son), G.O.B. took the role of the disappearing chicken. He dropped into the sewer and the crowd believed he has, in fact, teleported into the suspended cage. Though, with Tobias's head bleeding from his failing hair plugs, Steve worried the illusion has severely injured his father. ("For British Eyes Only")

The cage from the illusion was then stored at Balboa Towers. Buster had Oscar hide in the cage, but he was knocked out by the cage's powerful lid. George found him in the cage, shaved him, and attempted to make another escape. ("Prison Break-In")

G.O.B.: Well, check it. The illusion is called “Free Bird.” A magical bird— me in a beak— stands on a platform. There’s a puff of smoke, and I’m gone. Then seconds later, high above in a once-empty cage... who should appear?

Lucille: A guy that kind of looks like you?

Michael: He was hiding behind this mirror here?

Michael: Shouldn’t you be getting ready for your “Free Bird” trick?

Add a photo to this gallery
Retrieved from "https://arresteddevelopment.fandom.com/wiki/Free_Chicken_illusion?oldid=32319"
Community content is available under CC-BY-SA unless otherwise noted.