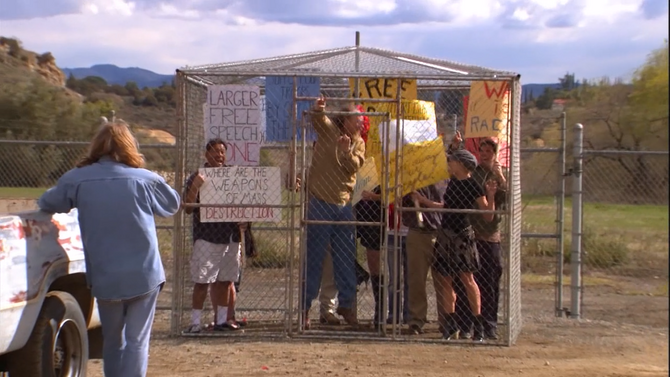 Near Camp Pendleton a free speech zone existed for war protesters to voice their opinions.

The zone, a cage in the middle of nowhere, had little effect because nobody of any importance saw them. Some locals, however, came and watched as Lindsay and others (including the man with "Freedom" sign) protested. The hosed them down and everyone but Lindsay left. They then tried to drown her out with Donna Summer's "Bad Girls" and Lindsay proceeded to cage dance, earning herself some self-respect. ("Whistler's Mother")

Retrieved from "https://arresteddevelopment.fandom.com/wiki/Free_speech_zone?oldid=32320"
Community content is available under CC-BY-SA unless otherwise noted.