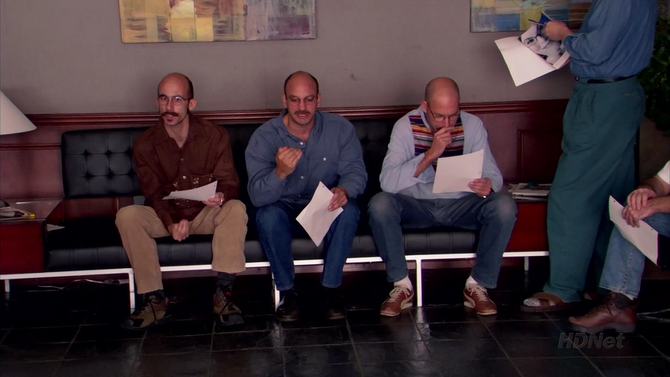 Tobias auditions for and obtains the role of Frightened Inmate #2, his first acting gig.

Tobias lands the job after being set up by Carl Weathers. When auditioning, he was afraid of the competition which made him feel more confident about auditioning. This confidence then made him feel afraid again. He was offered the role but was devastated to hear that the role would be fully nude, as it was a shower scene. Tobias is a Never Nude and can never be fully naked. ("Marta Complex")

He almost drops the role due to his affliction, but Lindsay helps him overcome his Never Nudity. ("Beef Consommé") He incarcerates himself at the Orange County Prison to research the role. Warden Gentiles is a fan of cinema so he allows this experiment. Tobias is traded by George to White Power Bill for a pack of cigarettes. ("Staff Infection") Before he can learn the true meaning of "frightened", Tobias talks Bill into killing himself. A conversation with George leads Tobias to realize that the true source of fear is anger. "You’re afraid. Fear has turned into hate. So Frightened Inmate #2 isn’t frightened at all. He’s angry. He’s a crabby old coot, and he needs love... just like everyone." ("Missing Kitty")

Add a photo to this gallery
Retrieved from "https://arresteddevelopment.fandom.com/wiki/Frightened_Inmate_Number_Two?oldid=47259"
Community content is available under CC-BY-SA unless otherwise noted.