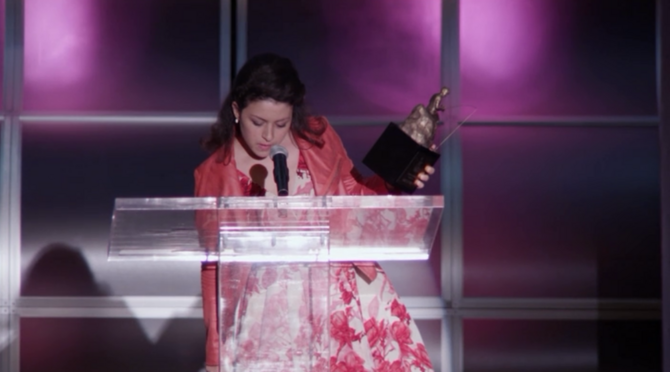 "Fun Night" was the eleventh episode of chronological re-cut of Arrested Development's fourth season. It premiered on Netflix on May 4, 2018.

Three days before the Herbert Love rally, Lindsay and Marky Bark drive to the hotel where the rally will take place. They plan to place a glitter bomb to sabotage his political campaign. Buster, on the other hand, has been welcomed into the Love family and has begun touring with them. George Sr. is also interested in Herbert Love as he hopes that if the border wall is supported by a politician, they can sell the land on the border to the government. Lucille is supporting the wall and this is also a reason why Lindsay has agreed to protest against Herbert Love. A check for Maeby's Gangie 4: Facelift film is also in Lindsay's possession although she thinks it was a check for a face lift from Lucille to Maeby.

Back at Balboa Towers, Maeby finds out that she's getting a Lifetime Achievement award at the Opie Awards which is on the same night as the Herbert Love rally, in the same hotel. George Michael offers to accompany Maeby to the awards, which she accepts. Maeby has also realised she must graduate and is planning to seduce Perfecto, an undercover cop, to incriminate him as he knows that she is too old to be a high school senior. Mark Cherry is also getting honored at the Opie Awards. The night before, G.O.B. takes Mark's entourage out but they get attacked by bees. G.O.B. takes a Forget-Me-Now and doesn't know this or that they have been rushed to hospital overnight.

George Sr. arrives at the hotel, followed by Maeby and George Michael in the stair car. George Michael tries to convince Maeby that he has grown up although he keeps referencing kid's TV shows. Maeby meets her old boss Mort Myers who apologies for her Lifetime Achievement award as it is only awarded to people whose career is dead. Mort is also there to promote his Internet company Schnoodle. George Sr. meets Herbert Love who says he will support the wall if he gets money and a redhead. Meanwhile, George Michael books a room for himself and Maeby, and Maeby talks to Rebel Alley and Mort Meyers about Fakeblock, which she has decided to promote. Rebel wants to know more about Fakeblock from George Michael but he doesn't want anyone to know about it. Maeby tells him to pick a new name so it doesn't look like they are related when she promotes him. He chooses the name George Maharis.

Perfecto arrives at hotel and Maeby tells George Michael about her plan to seduce him. Rebel still wants to know more about Fakeblock but George Michael excuses himself. At the same time, Perfecto admits that he is an undercover cop to Maeby. At the buffet table, George Sr. meets Lindsay, who is disguised in a red wig, and convinces her to hand over Maeby's check, which he passes on to Herbert Love. Maeby then meets Lindsay at the table and Maeby respects her act of political sabotage. However, Lindsay thinks Maeby is lying about her Lifetime Achievement award and leaves.

Maeby accepts her award while swearing throughout her speech and then promoting Fakeblock to the audience. G.O.B. is backstage, waiting for Mark Cherry, when he sees that Tony Wonder is performing magic for Schnoodle. In order to sabotage Tony, G.O.B. locks a podium which he thinks Tony will jump out of. Then, G.O.B. calls Mark Cherry and finds out that he is in hospital for alcohol poisioning.

It turns out that G.O.B. actually locked the podium Marky Bark was hiding in and the glitter bomb explodes with him still inside. Buster, who is on stage at the rally with the podium, curls up on the floor. Lindsay was supposed to free Marky Bark but she got distracted talking to a man who she didn't recognise as Herbert Love. Marky is escorted out of the building but Lindsay pretends to not know who he is. Maeby realises Lindsay has been flirting with Herbert Love and is unimpressed.

On the next Arrested Development: Fateful Consequences... G.O.B. thinks that he has no one left who cares for him before rejecting a phone call from his son, Steve Holt.

This episode is made up from 7 episodes of the original cut of Season 4. Because the re-cut is chronological and combines the characters' stories into one narrative, new narration was recorded and there is even some additonal dialogue. These changes, as well as which scenes appear in which original episode, are listed below:

Retrieved from "https://arresteddevelopment.fandom.com/wiki/Fun_Night?oldid=54751"
Community content is available under CC-BY-SA unless otherwise noted.