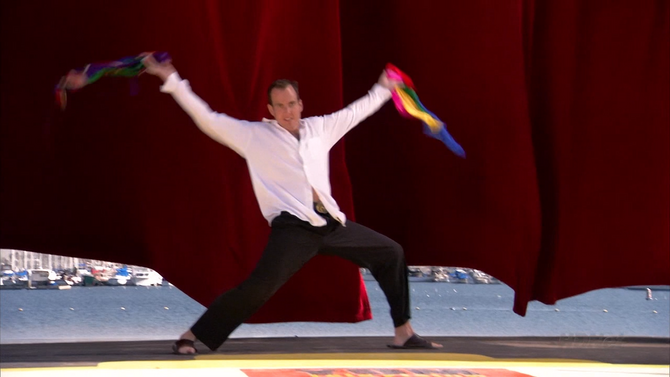 G.O.B.'s illusions
Appearances: "Pilot", "Key Decisions", "Charity Drive", "Storming the Castle", "Public Relations", "Beef Consommé", "Missing Kitty", "Not Without My Daughter", "The One Where Michael Leaves", "The One Where They Build a House", "Good Grief", "Burning Love", "Out on a Limb", "The Immaculate Election", "Sword of Destiny", "Meat the Veals", "Spring Breakout", "For British Eyes Only", "The Ocean Walker", "Prison Break-In", "Making a Stand", "Exit Strategy", "Colony Collapse" , "A New Attitude", "Premature Independence", "The Fallout"

An illusion is the art practiced by magicians. It is not to be confused with a trick, which is something a whore does for money. G.O.B. performs numerous illusions, most of which end in failure. His song of choice is "The Final Countdown" by Europe. His primary rival is Tony Wonder.

Illusions are not tricks.

Michael: So, this is the magic trick, huh?

G.O.B. performs an illusion for George Michael where he turned $20 into a game of Monopoly. The next day he was kicked out of The Alliance of Magicians after a FOX 6 news report revealed the workings of his Aztec Tomb illusion, which he was performing to celebrate his father's retirement. The Bluth Company had purchased the $18,000 prop for him. He is turned down from small gigs due to his recent blacklisting. ("Pilot") G.O.B. checks into the Orange County Prison to perform his prison escape illusion, but is stabbed by White Power Bill after a few escape attempts fall flat. ("Key Decisions") G.O.B. uses some illusions to try and pick up a parking security guard. ("Charity Drive")

To help the Bluth family name, G.O.B. performs some illusions at a local retirement home and Earl Milford sneaks out during the performance, raising more negative media attention. ("Public Relations") While Marta and Michael make out, they find some of G.O.B.'s props in her bed. ("Beef Consommé") During Spring Break G.O.B. practices his shirt-off-my-back illusion with George Michael, attempting to impress the audience of Y.O.M. Spring Break: Newport Beach, during which he also performs his disappearing yacht illusion by sinking the Lucille. ("Missing Kitty") He was shattered when the Girls with Low Self-Esteem DVD only used his flubs. ("Not Without My Daughter")

To impress the Bluth Company board of directors, G.O.B. performs his raining pennies illusion. ("The One Where Michael Leaves") He performs it again to convince them to build a second model home. ("The One Where They Build a House") After his father is believed to be dead, G.O.B. attempts to make the cover of Poof magazine by performing his magic coffin illusion. Buster freaks out in the middle of the performance and the coffin falls on top of G.O.B.. ("Good Grief") G.O.B. fires off a fireball in the model home kitchen. ("Burning Love") While performing a show at a child's birthday party, a cat gets trapped into a side with a seal, giving the seal the taste for mammal blood. He releases the seal into the ocean. ("Out on a Limb")

G.O.B. attempts to make some money by filming Tricks Around the Office at the Bluth Company offices. ("The Immaculate Election") He attempts yet again to regain membership in the alliance performing The Sword of Destiny, which temporarily impresses Tony Wonder until Buster cuts off G.O.B.'s fingers. ("Sword of Destiny") G.O.B. resurrects Franklin Delano Bluth, a puppet he introduced to "hip" up his act. ("Meat the Veals") While rescuing George from Kitty's kidnapping, G.O.B. passes a key. He also comes to terms with his recent flubs until falling to a pool. ("Spring Breakout")

George asks G.O.B. to perform an illusion to help him flee from the courthouse, so G.O.B. performs his Free Chicken illusion (originally titled "Free Bird" but was renamed due to legal issues.) ("For British Eyes Only") Because G.O.B. set Tracy Bluth on fire at her wedding to Michael, Michael asked G.O.B. to not perform an illusion at his wedding to Rita. However, Rita told G.O.B. she loved magic so he made a "walking on water" illusion for her. ("The Ocean Walker")

G.O.B. made a Graft Versus Host video, featuring some small illusions via (poor) camera trickery. ("Prison Break-In") G.O.B. shoots off a fireball while promoting his Banana Shack. ("Making a Stand")

George again manipulates G.O.B. into using his magic to cover up something illegal. This time, G.O.B. visits Iraq under the guise of doing ministry work. While there, he performs a burning bush illusion which gets him arrested. ("Exit Strategy")

On the RMS Queen Mary G.O.B. performed several small illusions, including "Flowers to Doves", "Doves to Rabbit" and "Mice-cellaneous." A year later he performed his Amazing Jesus illusion to get out of his wedding to Ann, and to jump-start his new Christian magic act. ("Colony Collapse")

G.O.B.: Two drowned white doves from "Flowers to Doves," a rabbit from "Doves to Rabbit," also drowned. These were mice...

Tobias: From "Rabbit to Mice?"

Tobias: How'd he do dat?

Video:Funeral Illusion
Funeral illusion
Video:Where did the lighter fluid come from?
Lighterfluid
Add a photo to this gallery

Add a photo to this gallery
Retrieved from "https://arresteddevelopment.fandom.com/wiki/G.O.B.%27s_illusions?oldid=53301"
Community content is available under CC-BY-SA unless otherwise noted.