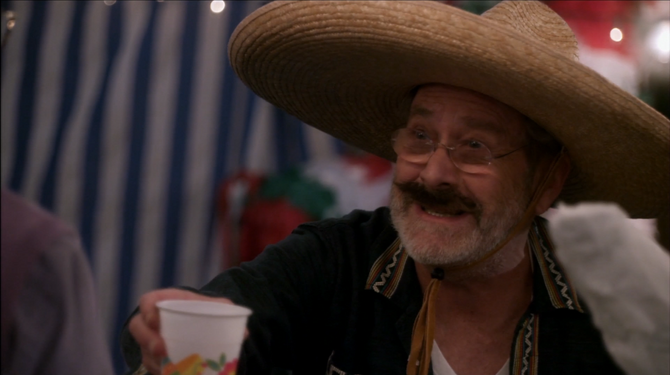 Lucile being surprised when Gene arrives in a disguise: AAAAAAAAHHHH! GENE!

Gene Parmesan is a private detective for the Bluth family.

Gene was hired by Lucille to determine if George Sr. ever had any extra-marital affairs. Gene never reported anything to Lucille, which made Michael believe he wasn't a very good Private Investigator.

Though Michael is fully aware of just how incompetent Gene is, Lucille seems to love him.  He has a habit of showing up to meet her in disguises, which never fails to delight Lucille.

Lucille hired Gene to track down George Sr. when he escaped prison. Gene found the stair car in Mexico, a lead that Michael followed up. Lucille later hired Gene to track G.O.B. who made her suspicious when he was trying to be her friend. Gene eventually followed G.O.B. to Mexico, where he was hired by Michael to help Ice and G.O.B. find George Sr.. ("¡Amigos!")

Gene's ad is seen later in a phonebook. ("Good Grief")

Michael calls Gene to track down Officer Taylor's address, but Gene is not seen or heard by the audience. ("Hand to God")

Lucille hired Gene as her P.I. to find evidence against Herbert Love. Gene got photos of Love with a redheaded prostitute. When Michael visited her and suspected G.O.B. of dating Rebel, Lucille told him to hire Gene to follow him. Gene and Michael then follow G.O.B. in his limo. ("Queen B.") Gene and Michael follow G.O.B. to My Little Ballroom where Gene buys a knife that can "both filet a chicken and subdue an intruder" at Thin Wally's Knife Store. ("A New Attitude")

At Cinco de Cuatro, Gene gives Buster two cups of Donkey Punch at the Chicken Dan's tent (whilst wearing a sombrero, poncho and fake moustache.) ("Off the Hook")

Gene is seen with Buster's rock monster costume from Fantastic 4: An Action Musical. ("Family Leave") Lottie calls Gene Parmesan to the witness stand. He was disguised as an assistan at Buster's trial. On Cinco, he says he was working undercover at the Donkey Punch stand. Gene did give Buster some Donkey Punch, but Buster knocked out Herbert Love and left the rock costume behind. Gene took the costume and performed in the musical. Therefore Buster has no alibi. Lucille says she was never impressed by Gene's disguise. This is shown not to be true when she yells again when she thinks he's appearing again.

Lucille: [Screams.] I knew it!

Narrator: Gene was far from the best.