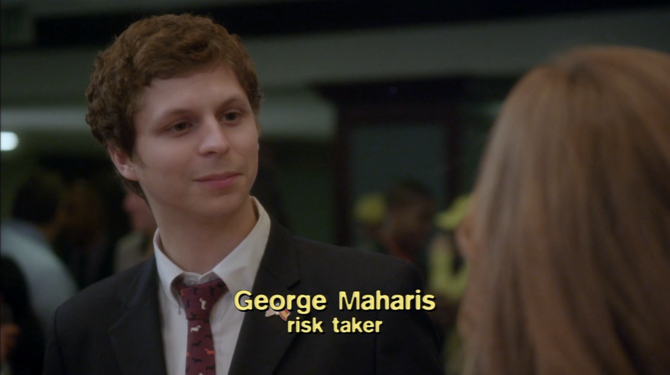 On November 21, 1974 actor George Maharis and hairstylist Perfecto Telles were arrested on sexual perversion charges for having sex in the restroom of a Los Angeles gas station.

In the Arrested Development episode "Flight of the Phoenix" George Michael Bluth mentions to his father that he is tired of being teased about his name due to singer George Michael's arrest for sex in a public restroom, and rejects the alternative nickname "Boy George" on the same grounds. In the episode "It Gets Better" he accidentally adopts the name George Maharis, unaware that it's the name of another George arrested for the same reason. Meanwhile, Maeby is dating a boy named Perfecto Telles in the episode "Señoritis".

Retrieved from "https://arresteddevelopment.fandom.com/wiki/George_Maharis_and_Perfecto_Telles?oldid=41989"
Community content is available under CC-BY-SA unless otherwise noted.