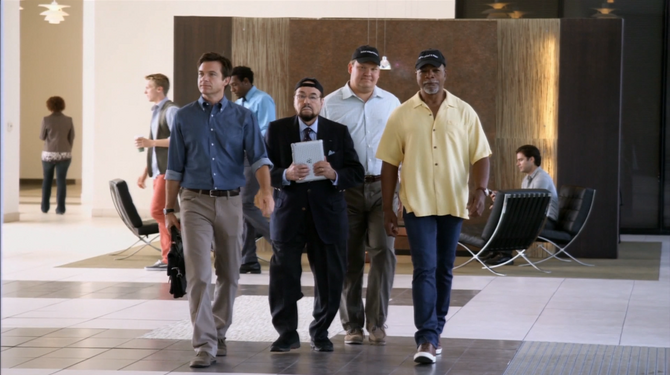 "Get On Up" was the thirteenth episode of chronological re-cut of Arrested Development's fourth season. It premiered on Netflix on May 4, 2018.

Michael starts assembling a "dream team" for the movie but still needs his family's signatures. George seeks medical attention for a troubling issue.

After agreeing to make a film about the Bluth family, Michael is shown his office in Imagine Entertainment by Kitty. Kitty tells him he must get his family's signatures before he casts any of the roles. Michael heads back to Balboa Towers and sees Lucille 2 together with George Sr. Michael asks for his signature but he refuses, although it turns out it was actually Oscar who rejected him.

The real George Sr. was in Mexico, worrying about the land that he only just realised was in Mexico. He plans to visit Lucille but first he sees Dr. Norman because he is concerned that he may be impotent. George Sr. remembers the Divine Spirit and thinks that perhaps he and Oscar have swapped personalities, explaining how he feels. Dr. Norman refers him to Orange County Imaging and prescribes him some adult magazines.

Michael meets with Carl Weathers to find out if he still has the rights to the Bluth family after making Scandalmakers. Carl never had the rights but agrees to act in the project. Michael then meets Warden Gentles and asks him to write the script. He suggests that Michael needs an distinguished actor to play the father, so they visit Andy Richter who agrees to be part of the project. They return to Imagine Entertainment and want to meet Ron Howard, even though Michael still has none of the signatures.

On the way up to Ron Howard's office, the elevator gets stuck and they must pitch the film to Ron Howard and Brian Grazer through the half-opened door. Michael is told he must collect the signatures and that he isn't in charge of casting anyway. To help him get signatures, Michael is given an office in Orange County where his Orange County Imagine building is mistaken for Orange County Imaging by many patients, including George. He apologizes, although he is unaware of what Oscar said, and offers Michael his magazines as a present. He also asks him whether he knows Herbert Love as he wants Michael to convince him to be against the border wall. Michael gets George Sr.'s signature when George Sr. realises that he is doing it to impress Rebel Alley.

On the next Arrested Development: Fateful Consequences... Michael improves at diagnosing the patients who accidentally come to his office and Rocky Richter-Wang takes Andy Richter's place on Late Night with Conan O'Brien.

Retrieved from "https://arresteddevelopment.fandom.com/wiki/Get_On_Up?oldid=54753"
Community content is available under CC-BY-SA unless otherwise noted.