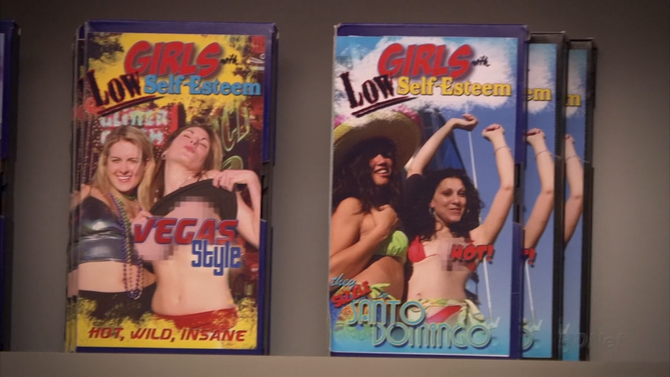 Girls with Low Self-Esteem are a series of videos produced by Phillip Litt and Y.O.M. television.

Normally the series features young women in risque situations. One of the videos breaks from the typical mold and mocks G.O.B.'s illusions. G.O.B. is so upset, he concocts his greatest illusion ever. He'll make a yacht disappear on camera. ("Missing Kitty") G.O.B. was horrified to find out that they didn't use the yacht illusion on the final video, but his dead dove flub. Later, at the Bluth Company offices, Ted showed his colleagues the Girls video which featured his daughter Caitlin. ("Not Without My Daughter")

The videos are seen as recommended on Amazon. ("Let 'Em Eat Cake")

Lindsey, upset with the success of the videos based on objectifying women hosts a "Girls with HIGH Self-Esteem" protest on Oceanside Wharf where Litt is filming. He gives her a "I had low self esteem in Newport Beach" hat which makes her fellow protesters jealous so they flash the camera for hats. Lindsay then tries to turn the tables on the series by producing Men with Low Self-Esteem at the same location. Though Litt makes his fortune exposing young girls with poor self-esteem, when filming on Newport Beach it is revealed that he is a Never Nude. ("Spring Breakout")

The videos are not to be confused by Families with Low Self-Esteem, a poorly received counselling video Tobias produced.