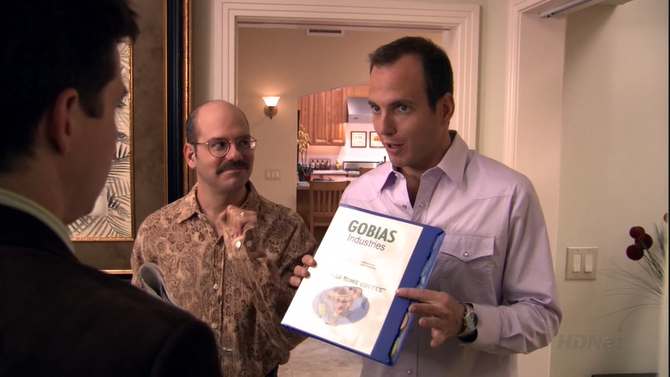 G.O.B.: Gobias Industries. As in, "go buy us some coffee."
From "Whistler's Mother"

Gobias Industries is a company formed by G.O.B. and Tobias. Their idea was "coffee" but little else was planned. ("Whistler's Mother")​​

'Gobias' is pronounced "Go buy us", such as in their slogan "Gobias some coffee".

After both Tobias and G.O.B. asked Michael for money, he told them to draft a business proposition so he could invest in them. While brainstorming at North Roast Coffee they were accidentally given the idea for a coffee shop by Michael himself. In shock, they left without saying a word.

They later pitched the company name and idea to Michael at the model home but by then Michael had already spent the $10,000 on Oscar's lemon grove. Tobias tried to bluff Michael by warning that the offer was off the table at midnight, but Michael called it "the worst bluff I've ever seen." ("Whistler's Mother")​​

Retrieved from "https://arresteddevelopment.fandom.com/wiki/Gobias_Industries?oldid=53566"
Community content is available under CC-BY-SA unless otherwise noted.