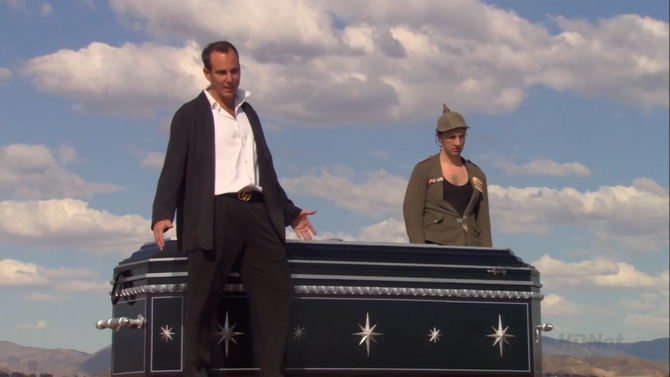 Lucille hires Ice, the bounty hunter to find George Sr., who may be closer than everyone thinks. G.O.B. tries to pull off an elaborate illusion, Maeby tries to set Lindsay up with Ice, and Michael tries to mend George Michael's broken relationship.

At a luncheon catered by Ice, the Bluth family is informed that George Bluth has been murdered in a Mexican prison. The family decides to throw a wake but vows to not tell Buster, who has a history of violence upon hearing bad news. At the wake Michael expresses that George and he never had a good relationship, something he would dedicate his life to avoid doing with his son.

After the wake, Michael told the rest of his family that George was not dead but was hiding in the attic. Rushing up to see, they found that he had escaped. Having convinced them he was alive and on the lam, they left the attic. George then came out of the Aztec Tomb and was allowed to live in the attic.

Upset that Tony Wonder made the cover of the latest Poof magazine, G.O.B. decided to throw an elaborate illusion at his father's wake. To keep Buster occupied, G.O.B. asked him to be his assistant. Buster was led to believe the wake was a dark humor birthday party for George.

At the wake, G.O.B. performed the magic coffin illusion but it failed when Buster learned the truth about George. The crowd applauded, not being any the wiser to the illusion's failure.

While on break from the Banana Stand, Ann talks to George Michael about how unsupportive his father is of their relationship. She then breaks up with him. A dejected George Michael is then informed of his grandfather's death but doesn't want to worry his father about his breakup so lies that he dumped Ann. While out walking to clear his mind, George Michael discovers a raggedy George hidden in a hole. He moves him to the attic of the model home.

Assuming George Michael was lying about breaking up with Ann and keeping her hidden in the attic just to please him, Michael invites Ann to console George Michael at the wake. Michael gives supportive words about their relationship. George Michael decided to reveal to his father that George was hiding in the attic.

Tired of both her parents' selfish attitudes about dating, Maeby asked Barry if he could emancipate her from their care. To prove she was in an unloving home she attempted to get Lindsay to flirt with Ice. Dressing her up in the SLUT shirt, Maeby nearly got the proof for Barry but Ice decided to head off and bounty hunt George yet again.

Retrieved from "https://arresteddevelopment.fandom.com/wiki/Good_Grief?oldid=54779"
Community content is available under CC-BY-SA unless otherwise noted.