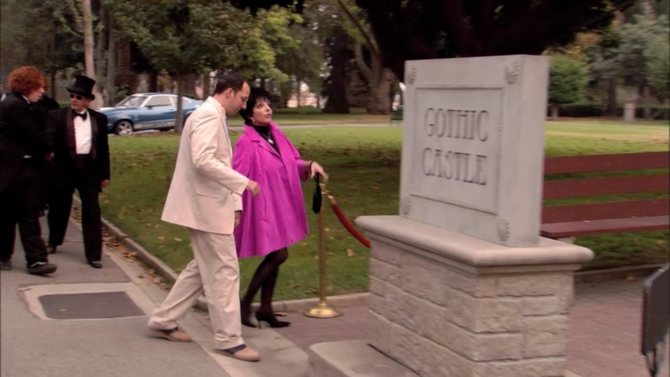 The Gothic Castle is a popular magic parlor, and the location of G.O.B.'s attempted comeback performances. Not to be mistaken for the Gothic Asshole.

When Rollo threatened G.O.B.'s legs (the assistant in his "saw the lady in half" illusion) G.O.B. convinced Rollo to give him one show to prove that he is Alliance of Magicians calibre. During the show he used George Michael and Marta, neither of whom are Alliance approved, and was refused re-entry. ("Storming the Castle")

G.O.B. and Buster met with Tony Wonder at the Gothic Castle to discuss Buster's upcoming show. Tony was wowed by the illusion (during which G.O.B. accidentally cut off Buster's fake fingers) and asked them to perform again. During the second performance, G.O.B. revealed he was the magician, not Buster. Buster then accidentally cut off G.O.B.'s fingers. ("Sword of Destiny")