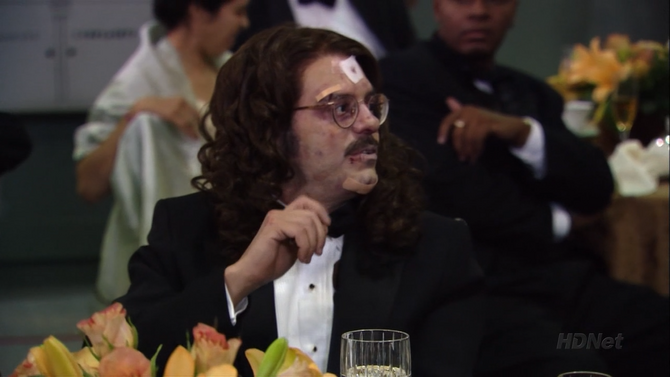 Graft Versus Host, or GVH is a medical condition that Tobias Fünke suffers from after receiving hair plugs to improve his acting credentials.

When G.O.B. is looking for a look-alike to help in his Free Chicken Illusion, Tobias volunteers and uses a magic marker to color hair on his head. He then tries a bob wig but lands on getting discount hair plugs to look the part. They were bloody and horrified everyone. ("For British Eyes Only") He grew fond of his hair plugs, and continued wearing them. ("Forget-Me-Now")

GVH started kicking in, and he would occasionally lose control of his hand muscles and drop things. ("Notapusy") It got progressively worse, and he would find that he lost control of his leg muscles. ("Mr. F") The leg paralysis worsened to the point where he needed a wheelchair, which he sometimes fell out of. ("The Ocean Walker") By the time his hair plugs were rich and flowing, they were literally sucking the life out of him. His teeth began falling out, skin became so weak that blood could burst through, and he lost nearly all his pigment. The Bluth family holds a charity dinner at the Orange County Prison to raise money for Tobias' treatment. However, Tobias reveals in the video that all he needs to be done to cured is have the hair plugs removed. The dinner party riots at the prison and is held in cells overnight. ("Prison Break-In")

Tobias does eventually get the hair plugs removed and bandages can be seen on his head ("Making a Stand") and later scars. ("S.O.B.s")