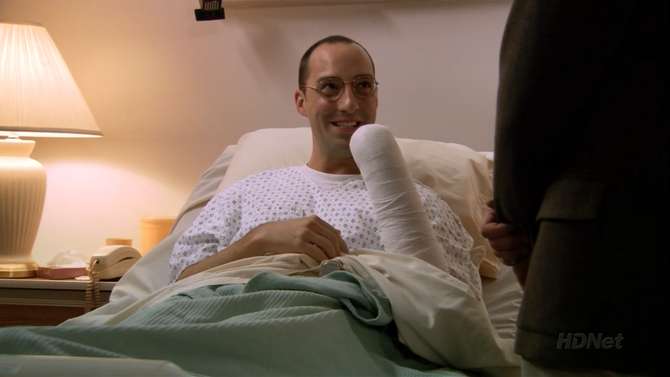 "Hand to God" is the twelfth episode of Arrested Development's second season.

Michael tells George Michael about Maggie Lizer's baby, whom Michael thinks is his. George Michael gets excited about being a big brother, but Michael lets him know that Maggie wants nothing to do with him after he accused her of faking the pregnancy at the end of the previous episode. Their conversation ends when Lucille calls Michael, hysterical, saying Buster has been hurt swimming in the ocean. Michael and George Michael meet Lucille and Oscar at the hospital. Dr. Fishman tells the anxious family that Buster is going to be "all right" - by which he means that Buster has lost his left hand. We learn that the attack has affected Buster's memory, as he doesn't remember why he went in the ocean or that he discovered the truth about his real father. Buster and Michael talk about the baby, with Buster telling Michael to go to Maggie since he obviously still has feelings for her. During the conversation, Michael forces awkward laughter when Buster makes various "missing hand" jokes. When Michael tries his own hand joke, Buster screams at him to "Get the (bleep) out of my room!"

Michael decides for the sake of the baby he needs to win Maggie back, and finds her at the Miss Temples bar. They begin to talk when they are interrupted by two police officers who checked Maggie's house after the break-in and they tell her to call them if there's anything else. When Michael says that he wants to rekindle their relationship for more reasons than just the baby, Maggie finally confesses that Michael is not really the father: "I went to a sperm bank....The father is some guy from Harvard." When Maggie asks him if he's really "that great of a guy" to raise someone else's baby, Michael replies yes but immediately regrets it, mouthing, "What is wrong with me?" The next day, Buster returns from the hospital, fitted with a metal hook prosthetic, to find the family gathered in Lucille's penthouse under a banner which reads "Welcome Home, Buster!" (the "You're killing me, Buster" banner strategically covered up). Buster says, "Let's give me a big hand!" and everyone forces awkward laughter. G.O.B. arrives at the party ignorant of Buster's accident, and is scared by Buster's hook. When Buster says his hand was bitten off by a seal wearing a yellow bow-tie, Tobias attributes that statement to the "playful mutterings of the shock victim" because a seal would never attack a human. "Unless, of course, it had acquired a taste for mammal blood." Flashback to G.O.B. performing a magic show with a seal wearing a yellow bow-tie, when a cat jumps into the chest where the seal is hidden. Cut to another flashback in which G.O.B. releases the seal into the ocean saying, "You're not going to be hand-fed anymore."

At the party, Lucille confesses to Michael that Buster's accident was her fault because she prayed for God to take anything to stop Buster from going to war. G.O.B. also confesses to Michael that he released a seal into the ocean after giving it a taste for mammal blood. "You've got a better case than Mom does," Michael says. Still not convinced that Maggie is not lying, Michael asks Lindsay to break into Maggie's house to find evidence that someone else is the father, but Lindsay refuses. Instead, Michael recruits his son, sitting terrified as Buster sleeps on his lap, with his hook dangerously near George Michael's face.

Michael and George Michael go to Maggie's house to try to find some evidence of another man. Michael tries to send George Michael in alone, claiming he can't fit through the doggy door, but George Michael just grabs a note taped to the door and runs back to the stair car, telling Michael to flee the scene. As Michael is trying to convince George Michael to go inside the house, a policeman knocks on the windows of the stair car and asks what they're doing there. The officer tells them that he's making sure there's not another break in, adding that his partner is inside with his gun drawn. After the officer leaves Michael apologizes to a stunned George Michael. Michael looks at the note from the door, which has "Really eager to hear from you" written under a phone number. Michael thinks that might be something a guy who got dumped by his baby's mother might say.

G.O.B. goes to the docks to rent a boat, carrying several animal crates containing terminally ill cats as a lure for the "seal who's got the taste for kitty's blood." Once on the open sea, G.O.B. tries to toss cats in the water when he is interrupted by the cameraboat telling him to get the cats out of the scene - it turned out the skipper had already rented his boat to appear in the movie Maeby was filming, The Old Man and the Sea. Using Gene Parmesan to trace the phone number he had found on the door to an address, Michael drives to the house where he believes the real father of Maggie's baby lives. Trying to make up for putting George Michael in danger earlier, he tells his son to wait in the car because "this one could get a little ugly." Michael knocks on the door and the same policeman from Maggie's house opens the door. Michael is invited inside, where it emerges that that Maggie's baby belongs to the policeman and his gay partner David. They had given Maggie a "mixed cocktail, two parts Taylor and two parts Carter and let her do her thing" saying that they don't want to know who the biological father is (Officer Taylor is white, Officer Carter is black). Michael decides to help the cops get their baby from Maggie.

Michael thought he was one lie ahead of Maggie, but really he was one lie behind: Maggie's client - the overweight waitress - wasn't really fat; she was carrying the baby that Maggie had been hired to bear. The urine that Tobias and Lindsay had tested had come from the waitress, not Maggie, and the fat suit they had found had belonged to Maggie until she upgraded to a realistic latex model (which is what Michael saw). At the courthouse during the trial, the waitress's water breaks and Maggie pretends she has gone into labor too. Back at the film set, G.O.B. confesses to Maeby that he's probably responsible for Buster's hand being bitten off. Maeby advises G.O.B. that he should tell Buster the truth, adding that Buster will respect him for it. As soon as G.O.B. leaves, Maeby smiles to herself and says, "Okay, now I'm just lying for no reason." Lucille prays again to God, asking Him to make Buster forget about his hand. At that exact moment Buster forgets about his claw and tries to give Oscar a massage. Buster gouges Oscar in the shoulder, then reacts with horror as he notices his hook as if for the first time. Screaming, "I'm a monster!" he goes on a rampage, trashing Lucille's apartment. At that moment, G.O.B. walks in and confesses he is responsible for Buster's hand, and is subsequently attacked.

Michael and the policemen find Maggie's room at the hospital, but when Michael grabs the baby she's cuddling it turns out to be the fat suit wrapped in a blanket. Maggie confesses that she "outsourced" the pregnancy to her client to add verisimilitude to her fat case. The cops retrieve their baby from the waitress and go home. Afterwards, Michael and Maggie agree: no more lies or sex. However, they end up having sex in her hospital room, which results in Maggie actually becoming pregnant with what we can assume is Michael's baby. It is unknown what happens to the child, as it is never referenced again in the series.

→ See more quotes from "Hand to God" at Transcript of Hand to God.