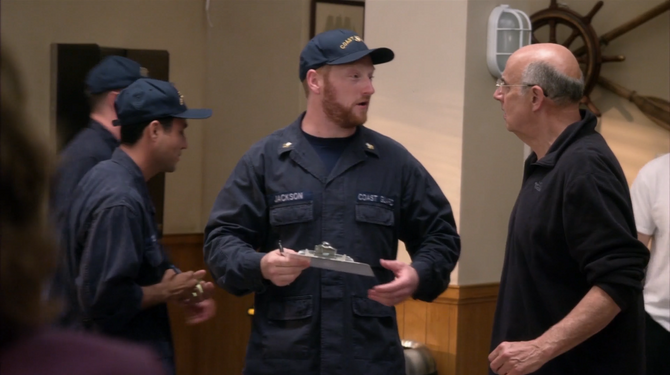 After the RMS Queen Mary was capsized by Lucille Bluth, the Bluth family and victims of the Bluth family met at the Harbormaster's Lodge to be processed. Barry met the family there and helped Lucille develop an alibi.

George Bluth was not on the Queen Mary when it sank, so he tried to find his wife Lucille at the Harbormaster's Lodge.

After finding out she was adopted and that her mother was being arrested for defrauding Bluth Company investors, Lindsay and Tobias met at the harbormaster's lodge to talk about their future. Lindsay decided to call it quits with Tobias and to take some time off to discover what's important to her in her life.

Tobias and Lindsay decided to take a brief break to discover their purposes in life. Tobias was also appalled by Lindsay's revelation that the entire Bluth family thought he was gay.

After his father's exoneration party and his mother was arrested G.O.B. spoke with Jackson about the animals he had on his person that drowned when Lucille stole the RMS Queen Mary. George Michael refused to give him his approval to see Ann but G.O.B. accepted his hypothetical "Yes" as a real "yes". He then realized the relationship meant nothing to him so he snuck into Ann's room to break up with her.

After Lucille capsized the Queen Mary, Maeby attempted to get her parents attention by pretending to be dead at the harbormaster's lodge. They didn't notice her so she planned on failing out of high school to teach them a lesson. They went to India on a spiritual journey so she resumed work on the Bluth family movie she pitched to Ron Howard.

When Lucille was pursued by the SEC aboard the RMS Queen Mary Buster fell off the boat into the ocean. Lucille decided to use his rescue story as her innocent plea in court. However, at the harbormaster's she was locked up. Buster struggled to adapt to life at home alone so he proceeded to continue with her daily routine — picking clothes out for her and making her Martinis.

Add a photo to this gallery
Retrieved from "https://arresteddevelopment.fandom.com/wiki/Harbormaster%27s_Lodge?oldid=45504"
Community content is available under CC-BY-SA unless otherwise noted.