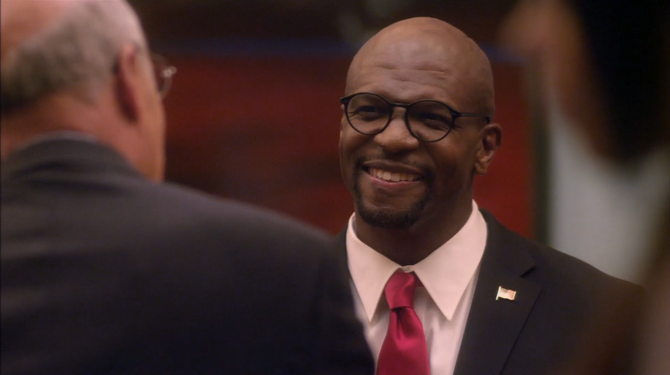 Herbert Love is portrayed by Terry Crews and appears in five episodes of Season Four of Arrested Development. Chronologically, he is last seen in "Red Hairing" in a coma, with Lindsay taking over his Congressional campaign.

Herbert Love is a right-wing politician running for Congress against Lucille Austero. He was bribed by George Bluth for $50,000 to support a wall between US and Mexico until George learned his property was on the wrong side of the border. Love also had an affair with Lindsay Bluth Fünke, who was unwittingly being pimped out by her daughter Maeby. Additionally, Love used Buster Bluth's bionic hand as a symbol for government waste in his campaign rallys.

Herbert Love began running for a California seat in the United States Congress in 2011 or 2012. He was a far-right politician who didn't believe the state should pay for health care, notably birth control.

In early 2012, finding him recently discharged from an army hospital, Love's wife Ophelia invited Buster Bluth (with bionic hand) to move in with their family. Buster danced with Love for a couple of rallys as a symbol of government waste. Buster attended high school and protected the Love children from bullys. (4x14 — "Off the Hook")

In late April, Herbert Love held a campaign at the Century Hotel. On the suggestion of Barry Zuckerkorn, George Bluth gave Love a $50,000 check in exchange for his support of the US/Mexico wall. (4x6 — "Double Crossers") Love then ran into a redheaded Lindsay, who was in disguise to help Marky Bark glitter bomb Love. She didn't recognize him due to Marky's faceblindness and their flirtation caused her to lose track of time. Marky's box exploded, hurting a dancing Buster on stage. (4x8 — "Red Hairing") (4x14 — "Off the Hook")

Maeby and Lindsay fought and Maeby called her mother a whore. (4x8 — "Red Hairing") While Love gave a speech supporting the wall, Love's campaign manager David paid Maeby to whore out Lindsay. (4x12 — "Señoritis") The next day, Lindsay returned to the model home where Maeby encouraged her to call Love to get Marky out of jail. Maeby arranged a meeting at Ealing Club for Lindsay and Love. (4x8 — "Red Hairing") (4x12 — "Señoritis")

The same day, George returned to the border and found survey tape up and discovered his land was actually in Mexico. George phoned Love to flip flop, but Love wanted $120,000. The next day, George asked Michael to get Love to oppose the wall during his speech at Cinco. (4x6 — "Double Crossers") George then visited Lucille in prison. Her plan was to have Love oppose the wall, but only after they've built enough to trigger the government payment. (4x10 — "Queen B.")

The next day Lindsay and Love got together at the Ealing Club, hit it off, and got a room. Lindsay ran into Michael who asked her, on behalf of their father, to get Love to oppose the wall. After making love, Love gave Lindsay a necklace he bought from Brother Brothers and hired her to be his key advisor. (4x8 — "Red Hairing")

Later that night Maeby suggested Lindsay take Love to Balboa club. (4x12 — "Señoritis") Lindsay takes that advice the following day where they ran into Michael and Rebel. The four of them bickered during the dinner and Love, especially upset at Rebel, stormed out. (4x8 — "Red Hairing") Rebel then left so Michael kicked Lindsay out of his Untitled Michael B. Project. (4x9 — "Smashed")

Four days later, Lucille told Oscar (thinking he was George) that Gene Parmesan had photographed Lindsay and Love. She was planning on blackmailing him into not supporting the wall. (4x10 — "Queen B.") Six days later on the morning of Cinco de Cuatro, Ophelia had been given the pictures of Lindsay and Herbert. She dumped her one-night-stand Buster because Love promised to be a better man. Buster stole the pictures. (4x14 — "Off the Hook")

At the Cinco celebration that evening, Lindsay talked to Love, but he dumped her trying to avoid a scandal. David paid her for 'services rendered'. (4x8 — "Red Hairing") Lindsay then ran into Maeby and gave her the wad of cash and said it was from Love. Maeby told her boyfriend Perfecto that Love is a bully and Perfecto went off to confront him. (4x12 — "Señoritis")

Instead, Perfecto outsourced to Buster. Buster saw Lucille 2 and gave her the photos of Herbert Love and Lindsay as revenge. Lucille then told Buster that she led him into a juice overdose on the night before his mother's trial, causing him to grow violently angry. Buster drank Donkey Punch and knocked out a passing by Herbert Love with his bionic hand. (4x14 — "Off the Hook")

David, afraid that he couldn't find Love, asked Lindsay to find someone to give his speech on the wall. Lindsay volunteered and planed to frame Love for sexual misconduct but got caught up in the crowd's frenzy. Love was found in coma, and days later Lindsay, with Hillary Clinton hair, replaced him on the ticket. (4x8 — "Red Hairing")

He appears as a passed out body in flashbacks