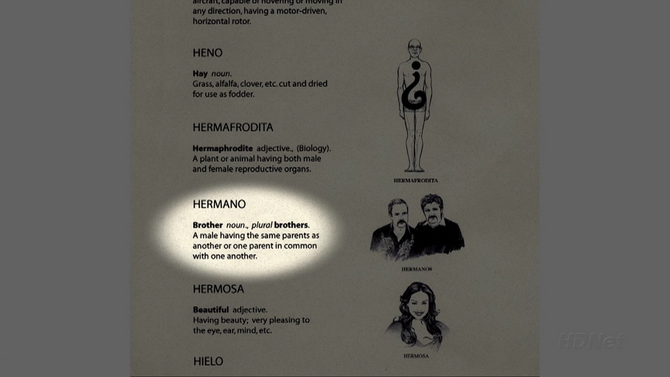 Hermano
Appearances: "Marta Complex", "Beef Consommé", "Best Man for the Gob", "The One Where They Build a House", "Flight of the Phoenix", "It Gets Better"

Hermano is the Spanish word for "brother" - a fact that neither Michael nor G.O.B. knew when they were tracking down the elusive man they believed was named Hermano. Turns out, Marta was interested in G.O.B.'s hermano - Michael. ("Marta Complex")

Buster clues G.O.B. in on the definition and they believe it is the man who plays Marta's brother Tío on El Amor Prohibido. Michael eventually confesses the truth to G.O.B., and the two fist fight over her in front of the courthouse. ("Beef Consommé")

G.O.B. evidently learned what "hermano" means and calls Michael "hermano" in "Best Man for the Gob".

In Mexico, George tells a federale that he is not his "brothero". ("The One Where They Build a House")

When Michael is pitching his strategy to rid George Michael's dorm room of P-Hound he says "it's adios, brothiero." ("Flight of the Phoenix")

George Michael says "it's adios fathiero" when talking with P-Hound on how to get his father out of the dorm. ("It Gets Better")

Retrieved from "https://arresteddevelopment.fandom.com/wiki/Hermano?oldid=47509"
Community content is available under CC-BY-SA unless otherwise noted.