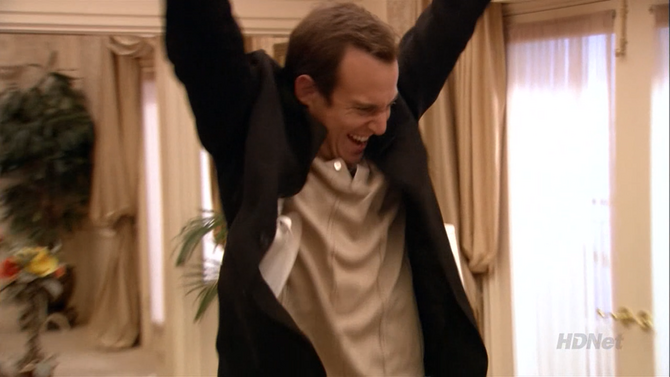 G.O.B. often keeps a hidden dove in his jacket or pants in case he needs to spontaneously perform an illusion.

G.O.B. perform the hidden dove illusion as a way to impress Enrique at Sitwell Enterprises, but he doesn't accept it as a letter of recommendation. ("Pilot")

G.O.B. purchases a dove to use in his act but kills it before even leaving the pet store. He places it in a brown paper bag and puts it in the model home freezer, with a note "Dead Dove — do NOT eat." He later flings the bird into the ocean as an act of protest against the shop's return policy. ("Top Banana")

While filming Tricks Around the Office, G.O.B. rips open a brown paper bag, expecting the bird to fly out. Instead, it falls to the table, dead. ("The Immaculate Election")

While signing away video rights of his Disappearing yacht illusion to Phillip Litt for the Girls with Low Self-Esteem video, G.O.B. accidentally stabs a dove in his jacket with a pen. He is later upset to learn that Litt only used his flubs in the video, including when a dead dove dropped to the ground instead of flying away. ("Spring Breakout")

When G.O.B. tries to impress his father with his raining pennies illusion, a dove flies out of his suit. G.O.B. apparently forgot which magic wardrobe he was wearing that day. ("For British Eyes Only")

When G.O.B. and Michael are at odds, G.O.B. threatens to attack him after he takes a live dove out of his pants. G.O.B. later shoves bread down his pants, claiming you don't want a live bird down your pants, and that Tony Wonder lost a testicle to a hungry bird. While sharing a sweet moment, G.O.B. tells Michael "If you feel something moving down there, it’s just the bird" but the dove is seen walking on the counter. ("Making a Stand")

G.O.B. performs the illusion for Rebel at the club and Jeremy Piven, by making it appear in her "David Spade" handbag. ("Colony Collapse") She later takes the dove home in her bag and accidentally kills it. She puts it in the freezer so she can deal with it when she sobers up. ("A New Attitude") Years later, Michael finds it in her fridge and assumes the dove is G.O.B.'s. ("Queen B.")

G.O.B.: If I didn’t have a live dove in my pants right now, I would leap across this table and... you know what? Forget it.

From "Making a Stand"

Add a photo to this gallery
Retrieved from "https://arresteddevelopment.fandom.com/wiki/Hidden_dove_illusion?oldid=34904"
Community content is available under CC-BY-SA unless otherwise noted.