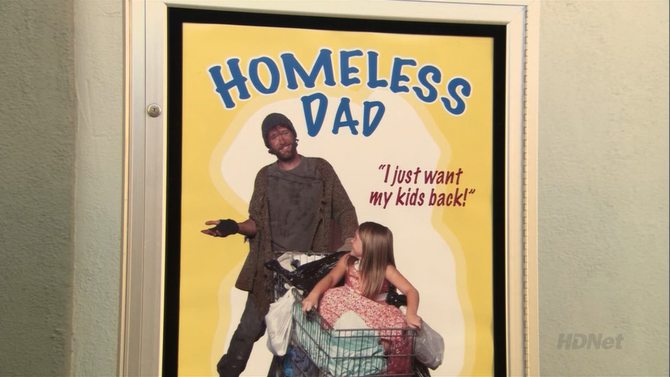 Homeless Dad
Appearances: "The One Where They Build a House", "Mr. F" — Mentions: "Switch Hitter"

Tom Jane: I just want my kids back.

Homeless Dad was a movie he had to do in exchange for making a film about a junkie's life, Junk. Tom Jane was researching the role when he asked Lindsay, who thought he had the rugged good looks of a movie star, for a drink. When she found out he was homeless, she was disgusted. ("The One Where They Build a House")

A banner can be seen at the movie studio congratulating Homeless Dad as the #3 movie in America. ("Switch Hitter")

The poster is seen at a movie theatre when Michael Bluth and Rita see Love, Indubitably. It is also seen hanging in Mort Meyers' office. ("Mr. F")

Add a photo to this gallery
Retrieved from "https://arresteddevelopment.fandom.com/wiki/Homeless_Dad?oldid=32351"
Community content is available under CC-BY-SA unless otherwise noted.