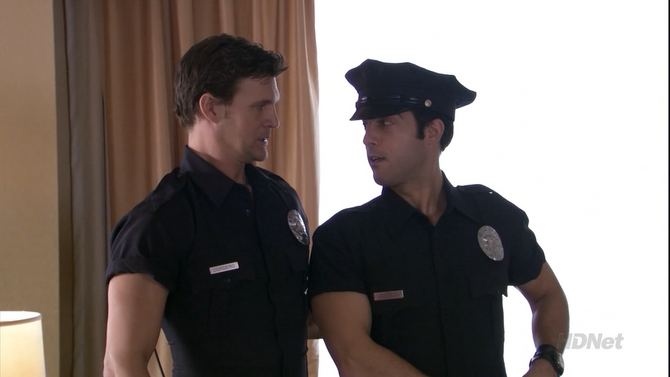 The Hot Cops are a group of male dancers (and often, strippers) that are called upon at various points to help with Bluth family schemes. Some of their work is heavily homoerotic.

G.O.B. once was a member until he failed to deliver on a gig. He showed up at an apartment, pounded on the door, and yelled "Open up! Police!" A shotgun blast then ripped through the door, but G.O.B. manages to scuttle away uninjured. ("Pier Pressure")

G.O.B. hired the Hot Cops on Michael's request to teach George Michael a lesson about doing drugs. Two Hot Cops played drug dealers and the rest played police pretending to arrest George Michael. He knew it was an act because one of the Cops was his choir teacher. ("Pier Pressure")

G.O.B. hired the Hot Cops to act as party-goers for his bachelor party. They showed up as cops but changed into various hunky outfits. One Hot Cop, Bix held a conversation with Bluth Company accountant Ira Gilligan and asked him to be the designated driver. G.O.B., however, was attempting to get Ira drunk so he would flee the country. The plan failed and the Hot Cops left. ("Best Man for the Gob")

G.O.B. reveals to Buster that he wears stripper clothes even when he's not stripping. He also lets Buster borrow an army outfit for George Bluth's funeral / birthday party. ("Good Grief")

The Hot Cops were hired by Lindsay to pose as roughnecks to scare Tobias into selling his newly-purchased Tobias is Queen Mary nightclub. Instead, Tobias convinces them to quit their lives of violence and perform at The Queen Mary. Of course, they are not violent at all and simply couldn't pass up the opportunity to perform. Thinking they've made impeccable progress in thirty minutes, Tobias declares they must take their talents and "newfound inspiration" to the streets. When they try to convince a real gang to quit violence, one of the Hot Cops is shot and they and Tobias get beaten up. ("Queen for a Day")

During George's exoneration party, Tobias hired the Hot Cops to dress as sailors. They got lured into the RMS Queen Mary's steam room by Lucille to shovel coal so she could flee the SEC. ("Development Arrested")

The Hot Cops are present at the Harbormaster's Lodge after the RMS Queen Mary was capsized. Tobias talks with them and remembers each of their names, but they are also seen in the background while other Bluths converse. ("Borderline Personalities") ("Indian Takers") ("A New Start") ("Colony Collapse") ("Señoritis") ("Off the Hook")

Tobias's acting reel is set to a piece of music that appears to be a theme tune for the Hot Cops. ("Smashed")


We'll turn that old frown upside-down
Hot Cops, we're aiming to please
You know we'll get down on our knees
We're taking on the bad boys with our loving guns
We'll pump you full of molten lead
Bang, bang, you're dead
Hot Cops, just give us a squeeze
Hot Cops!