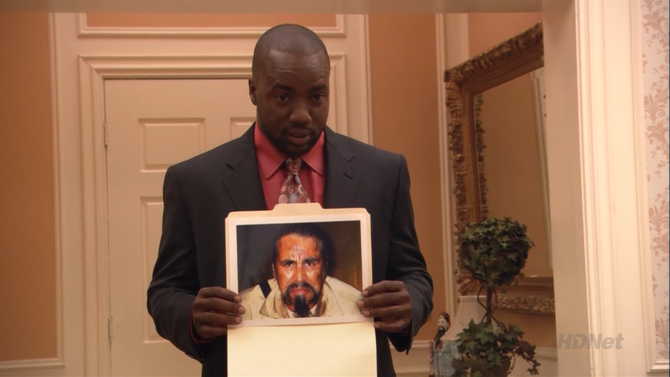 Ice is a bounty hunter and professional caterer. Lindsay was attracted to him and tried multiple times to seduce him but he was not interested.

Inspired by Gene Parmesan, G.O.B. hired Ice to track Michael on a suspicion that Michael was fleeing the Bluth Company's financial woes to Mexico. Ice followed Michael as he searched for George Sr.. Michael caught wise to G.O.B.'s plan when Ice tackled him, so he paid Ice to hunt down his father instead.

However, Lindsay was attracted to Ice so she lured him to the model house by pretending she knew where her father was. He tackled Tobias, thinking it was George Sr., and returned to Mexico where he tackled Michael again for trying to shake him. Michael then paid him more money to be friends with G.O.B. as they searched for George Sr.. ("¡Amigos!")

Lindsay: I don't suppose you'd be interested in catering an "affair" with me.
From "Good Grief"

Ice later catered a Bluth family brunch as he gave them the scoop on their fugitive father: George Bluth had been murdered by a guard in a Mexican prison. Ice then catered George's funeral. Lindsay again tried to seduce him, but her continued attempts failed despite Maeby's encouragement, including getting her to wear the SLUT shirt. ("Good Grief")