In God We Trust 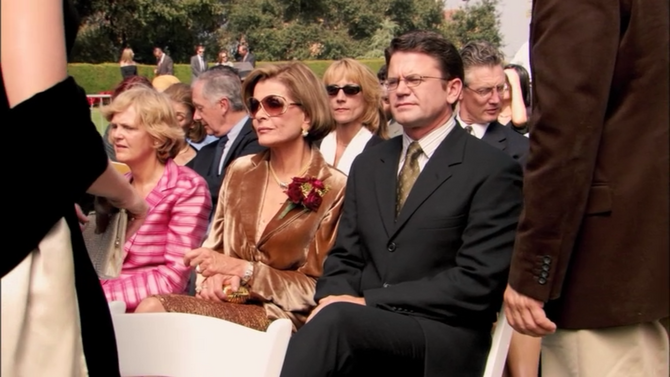 "In God We Trust" is the seventh episode of Arrested Development's first season.

Michael attempts to fire the family's incompetent but likable attorney. George Michael impresses Maeby with a muscle suit for a "Living Classics" pageant. Tobias has a psychological affliction where he is unable to take off his clothes.

The Bluth children meet at Lucille's apartment with their lawyer Barry Zuckerkorn who informs them that for $10,000 George can be released from prison to participate in the Living Classics Pageant. They refuse to pay and Barry leaves. Michael tells the family he wants a more professional lawyer. Lindsay speaks privately with her mother to ask for money to pay off her credit cards. Lucille refuses and, out of jealous of Lindsay's chumminess with Michael, manipulates her against Michael.

At the model home Michael and Lindsay talk over several drinks. Lindsay reveals Tobias is a Never Nude and Michael promises to pay off her credit card bills. The next day Michael meets with attorney Wayne Jarvis to replace Barry but is interrupted by Lucille. Lucille manipulates Michael against Lindsay and he slips Tobias' condition. He absentmindedly has her wait in the same room as Wayne.

The next day, Lindsay finds flowers at Lucille's apartment signed by their lawyer. She brags to her mother that Michael is helping out by paying for her credit card bills. Lucille brings up Tobias' condition and Lindsay once again gets mad at Michael. Back at the office, Lindsay chews Michael out in front of Wayne. They figure out Lucille has manipulated them both and decide to publicly shame her by paying to have George participate in the Living Classics Pageant and catch her on a date with Barry.

This plan would also allow them to fire Barry and hire Wayne.

At the pageant the twins find Lucille on a date with Wayne. He hides to avoid George's anger but when George's exhibit is shown, he is nowhere to be seen. Instead George is fleeing from the guards in his God costume. Michael chases him down, and G.O.B. chases Michael down. George is apprehended and the family loses their $10,000.

Buster pawns his role of Adam in the Living Classics Pageant off onto George Michael. Tobias becomes jealous of the role and tries to get it from George Michael. Maeby sees George Michael wearing the muscle suit for the role and compliments him, causing him to wear it all the time to keep her attraction. He tells Tobias that he can't take it off, but won't give him the reason. Tobias assumes George Michael is a fellow Never Nude and struts off in his cutoffs.

George Michael finally sees the frontispiece that Buster has told him about and becomes very ashamed. During the Pageant he wears cutoffs and the crowd boos. Tobias stands up for him and shouts "there are dozens of us! Dozens!"

G.O.B. catches Michael learning Spanish to impress Marta but Michael claims it is for business. Maeby, who has been ignored by her self-involved parents pretends to be escaping to Portugal. G.O.B. sees the plane ticket and believes Michael is fleeing to South America. At the pageant, he chases Michael down on his segway and realizes Michael isn't fleeing.

After pawning off the role of Adam onto George Michael, Buster is free to spend the day with Lucille Austero. He is afraid to be seen with her in public, but she eventually convinces him to go to the pageant. When they arrive the crowd is booing George Michael but Buster assumes the cries of disgust are directed toward him and has a panic attack.