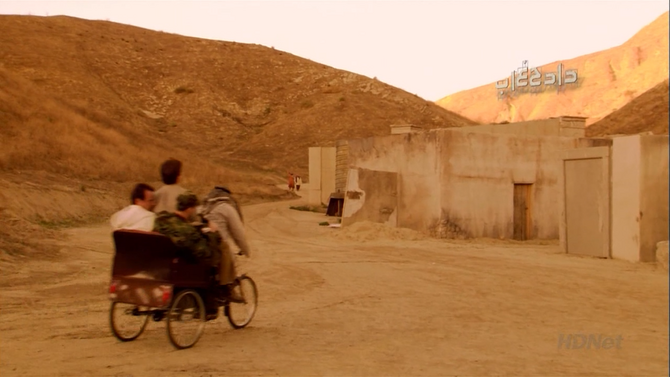 Iraq is a country in the middle east in which the Bluth Company did business. George Bluth was selling plans and building homes for Saddam Hussein, to a degree which might be considered "light treason".

George first told Michael about the "light treason" while in prison. ("Visiting Ours") Michael discovered George's operations in Iraq due to a FOX 6 news report about versions of the model home appearing in Iraq. He asked Lucille who stated that George would return from trips smelling of dates, and once received a severed human toe. ("Let 'Em Eat Cake") G.O.B. finds a contract in the wall of George's office signed by Saddam Hussein. The briefcase is stolen by George and vanishes. ("The One Where Michael Leaves") Tobias photographs his balls and the FBI and Wayne Jarvis think it is aerial shots of Iraq, namely a picture George had of WMD bunkers. ("Sad Sack")

A video of George hiding in the attic makes people think he and Michael are hiding in Iraq. ("Sword of Destiny") George's business in Iraq is mentioned in Scandalmakers. ("Spring Breakout") George tells Michael he was set up by a British syndicate and never intended to build houses in Iraq. ("For British Eyes Only") Michael holds a family meeting to discuss George's legal defense. ("Forget-Me-Now") Jan Eagleman mentions Iraq in the episode of Mock Trial with J. Reinhold. ("Fakin' It")

G.O.B. holds a magic show in Iraq to cover up George's ask to burn down some model homes. G.O.B. is arrested for starting a "burn bush" riot and Michael and Buster travel to rescue him. They discover George was hired by the CIA to build homes for Saddam Hussein so he could be monitored. Richard Shaw nearly kills them for their knowledge but they get away with it. ("Exit Strategy") The SEC drops all charges against George Bluth, including the Iraq charges. ("Development Arrested")

Retrieved from "https://arresteddevelopment.fandom.com/wiki/Iraq?oldid=32364"
Community content is available under CC-BY-SA unless otherwise noted.