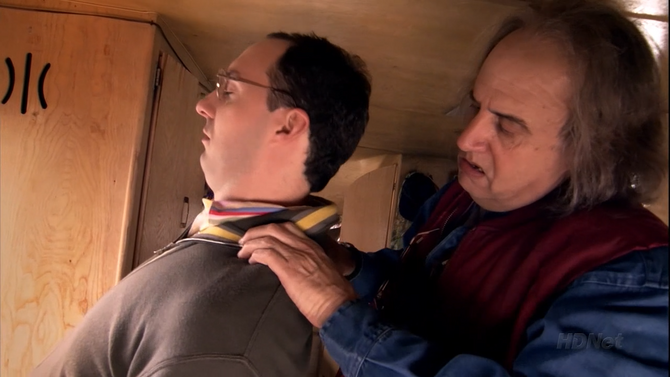 Is Oscar Buster's father?
Appearances: "Bringing Up Buster", "Whistler's Mother", "Not Without My Daughter", "The One Where Michael Leaves", "The One Where They Build a House", "¡Amigos!", "Good Grief", "Out on a Limb", "Meat the Veals", "Righteous Brothers", "Prison Break-In", "Development Arrested", "Double Crossers"

A recurring joke on Arrested Development is the identity of Buster Bluth's biological father. Raised by George and Lucille Bluth, it is strongly suggested by Oscar Bluth that Buster is his son, and revealed to be true by Lucille in "Out on a Limb".

Throughout the show, when Oscar mentions of being Buster's biological father, the same overly dramatic music is played. It plays in episodes "The One Where Michael Leaves", "The One Where They Build a House", "¡Amigos!", "Good Grief", "Out on a Limb", "Meat the Veals", "Righteous Brothers", and "Double Crossers."

Buster: Oh! They said my father was here.

Buster: You’re the one who says I need a father figure.

Oscar: You know, you should let your hair grow long.

Buster: Well, I’ve thought about it. I guess I’d look like you.

Oscar: More than you’ll ever know.

Oscar: Yes, and she’s not having an affair with the boy’s... uncle.

Oscar: Yes, it’s your father’s birthday. Which coincidentally is my birthday.

Oscar: The boy is going to war. You’re going to have to face that.

Lucille: It’s none of your business.

Oscar: He is my boy. I need macaroons.

George: I want you to know that it is okay for you to hide. A man can hide. There’s a quiet courage in that.

George: I’m not your uncle. I’m your father.

Buster: [To Lucille] You lied to me. Uncle Oscar is my father. He just told me so. And maybe you’re not even my real mother. For all I know Lucille II is my real mother! Oh.

Lucille: Buster, you were never supposed to know.

Oscar: I think she misses my brother.

Oscar: Maybe he is.

Buster: G.O.B. made me kiss Franklin, and I think my father was here.

Oscar: Maybe he still is.

Oscar: My fault? I was trying to keep you from burning yourself, you idiot! I mean, yes, yes. George, Sr. sure rushed this to market.

Oscar: Oh, I’m so forgetful. I hope you don’t get that from me.

Buster: Get that from you? Do you feel okay?

Oscar: Just forget it! I wanted to share my Pop Secret with you! Oh, but forget it!

Buster: You lied to me! You said my father was my father, but my uncle is my father... My father is my uncle!

Buster: (to Oscar) Uncle/Father Oscar? What are you doing here?

From "Prison Break-In"
Retrieved from "https://arresteddevelopment.fandom.com/wiki/Is_Oscar_Buster%27s_father%3F?oldid=23778"
Community content is available under CC-BY-SA unless otherwise noted.