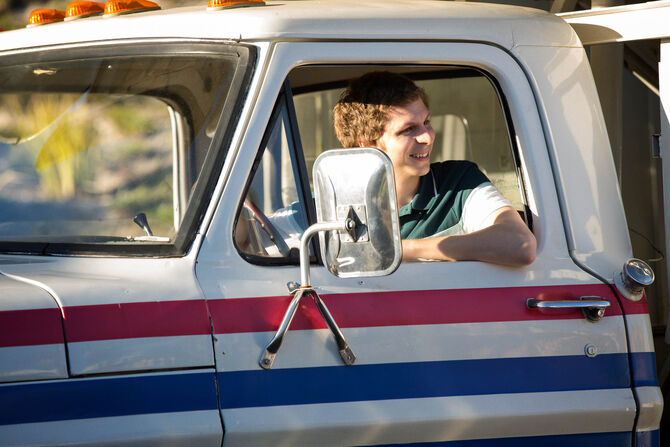 "It Gets Better" is the thirteenth episode of Arrested Development's fourth season.

At UC Irvine things get steamy when George Michael finds himself in a love triangle with his best friend Ray and his girlfriend Becky.

After George's exoneration party and Lucille was arrested, George Michael was told by Maeby that she wasn't interested in him anymore (mostly because he was a bad kisser). Weeks later he was thrown a graduation party by his family at Balboa Towers. He was given a check from his grandparents to buy a car but his father made him rip it up. Instead, he was given the stair car and sent off to college. His freshman year he tried to grow out of his awkward phase and became slightly more social. His sophomore year he had two good friends Ray and Becky. He dated Becky and she later dated Ray, and he was emotionally devastated. He then studied abroad in Spain where he learned to kiss properly and made love to a Spanish housewife, who it is implied he unknowingly impregnated. Returning home with a moustache, George Michael found himself in an extra-large dorm room all to himself.

After the California housing market collapsed and Pete the Mailman died, Michael moved in with him. He was later assigned a roommate Paul 'P-Hound' Huan. George Michael was attempting to get into Juilliard on the woodblock and found recording himself with a band wasn't highlighting his skills enough. He and P-Hound decided to make a woodblock app for the iPhone as his resume to music school. P-Hound paid $0.99 times three for other wood block apps but George Michael paid $5,000 for a trademark to the name FakeBlock. George Michael needed money so he signed up to tutor math students and he saw Maeby's name so signed up for her and played it off as a coincidence.

After Maeby, George Michael, P-Hound, and Michael voted Michael out of the dorm, George Michael agreed to take Maeby to the Opie Awards, hoping to get close to her. He booked a room in the hotel for the two of them but found out she had a boyfriend. Maeby had been bragging about FakeBlock to Rebel, to whom George Michael said his name was George Maharis. He wasn't interested in her, which made her interested in him. The next day news of FakeBlock was everywhere and George Michael tried to calm the storm until Maeby said "I wouldn't get into bed with you on this if I didn't trust you" and he continued with the charade, hoping to have sex with her.

In the chronological re-cut of season 4, footage from It Gets Better is used in 13 different episodes. The original cut of Season 4 is slightly longer than the re-cut version. Because of this, various lines of dialogue and sometimes even scenes are cut. These changes, as well as which scenes appear in which remixed episode, are listed below:

George Michael: Spanish, speak to me in Spanish. Because the only way the college credit is actually activated is if I have...

George Michael: Cook... cook at... cooking at you?

George Michael: You're a terrible mother.

George Michael: It's $5000 for the domain name, and then there's this whole XML website fee.

P-Hound: I got the last one.

George Michael: That was 99 cents.

Rebel Alley: Well, you are George Maharis. Everyone's talking about your software company. I'm sure women are just throwing themselves at your feet.

George Michael: Well, you know, I, uh, I prefer a woman who aims higher.

Add a photo to this gallery
Retrieved from "https://arresteddevelopment.fandom.com/wiki/It_Gets_Better?oldid=54738"
Community content is available under CC-BY-SA unless otherwise noted.