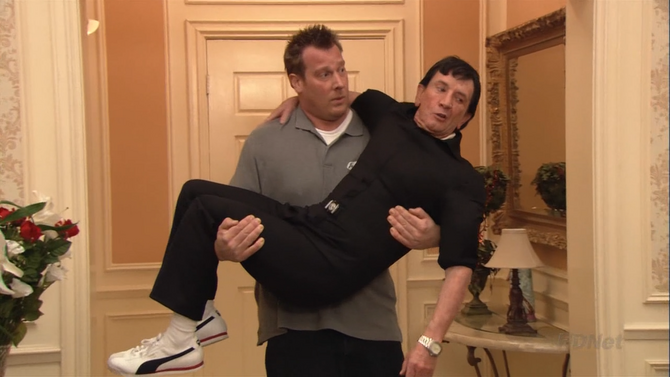 Jack Dorso is portrayed by comedian Martin Short and appears in one episode of Season Two: "Ready, Aim, Marry Me."

Jack Dorso, though not actually related to the Bluth family, is known to them as Uncle Jack. An obscenely rich former radio star and longtime friend of the family, Jack occasionally provides financial help to the Bluths.

Dorso starred as Bullet in the 1940s radio serial Red McGibbon and Bullet: Nazi Hunters which propelled him to fame. After the actor who portrayed Red McGibbon was jailed for having communist sympathies, Dorso attempted a solo film career with Ready, Aim... Marry Me! which flopped at the box office. He than began to capitalize on his considerable upper-body strength, opening a chain of gyms. Every year, he would perform a highly-publicized birthday stunt, lifting increasingly heavy weights, declaring "Five pounds for each year of my life!" Unfortunately, he lost the use of his legs on his seventieth birthday, and has since hired a man named Dragon to carry him around, rather than using a wheelchair.

His last name may be a reference to the fact that, since he can't use his legs, he is just a muscular torso.

Michael invites Jack Dorso to a party at Balboa Towers to ask for money. Jack is instantly attracted to Lindsay so Michael sets them up on a date. Lindsay, who's very attracted to Dragon, goes along with the date because she knows Michael is often disappointed that she never takes one for the team.

On the date, Jack's cowboy boots and hat must be duct taped to him because they keep falling off. His legs are extremely buoyant in the hot tub as well. Jack realizes that Lindsay isn't attracted to him and decides to give Michael the money anyway. ("Ready, Aim, Marry Me")

In the end of episode 13 the box of the "guy who has been dead for 2 years" has written Jack on it. Also one of the lawyers says "so it couldnt have been the uncle". Because of that he is probably dead. It is stated that he had a relationship with Mimi

Retrieved from "https://arresteddevelopment.fandom.com/wiki/Jack_Dorso?oldid=52998"
Community content is available under CC-BY-SA unless otherwise noted.