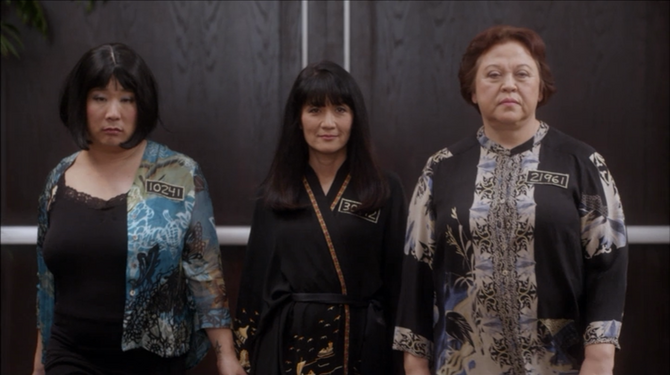 The Jade Dragon Triad is a gang of three Asian women who are prominent in the Orange County Correctional Facility L.I.T.E.. They protect Lucille during her stay there and she gets Olive (China Garden's aunt), amongst them, to invest in the border wall between the US and Mexico.

Lucille becomes a probationary member until she teaches the Triad a loophole to the no smoking rule, giving her full membership. She gets an investment but, due to the Bluths conspiring to gouge the US government and other related mishaps relating to Buster's map of the US during his studying of cartography mean that the wall is never built. Angry with the lack of progress, the group turns on Lucille and Mrs Oh attempts to stab her with uncooked noodles. Lucille manages to attract the attention of security and wet the noodle dagger and is separated from the group. ("Queen B.")

The members of the group, including Lucille, star on the show Real Asian Prison Housewives of the Orange County White Collar Prison System.

Add a photo to this gallery
Retrieved from "https://arresteddevelopment.fandom.com/wiki/Jade_Dragon_Triad?oldid=46820"
Community content is available under CC-BY-SA unless otherwise noted.