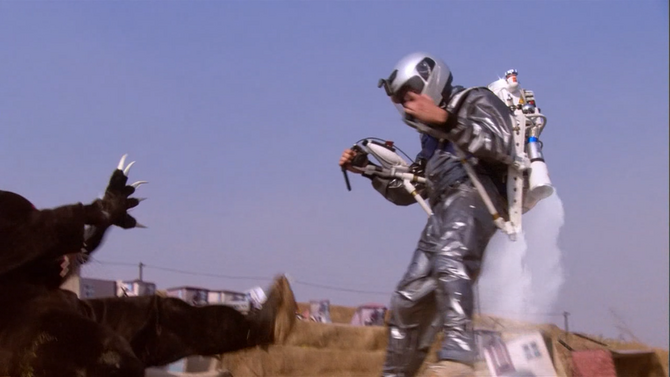 George attempts to escape house arrest by purchasing a jetpack.

George originally thought he could fly away from his house arrest in Balboa Towers in some jetpants and searched the web and purchased a jetpack from Japan. The crate was mistaken by George Michael to be his birthday present and he struggled to assemble it and fly it, especially due to the confusing and rather unhelpful Japanese-language instruction video. He accidentally flew into Tobias, dressed as a mole, as he was destroying tiny town. ("Mr. F")

G.O.B. and Michael attempted to use the jetpack to break into the Orange County Prison, but it was unrestrained and flew away. An inmate found it and assumedly escaped from prison with it. ("Prison Break-In")

Retrieved from "https://arresteddevelopment.fandom.com/wiki/Jetpack?oldid=33052"
Community content is available under CC-BY-SA unless otherwise noted.