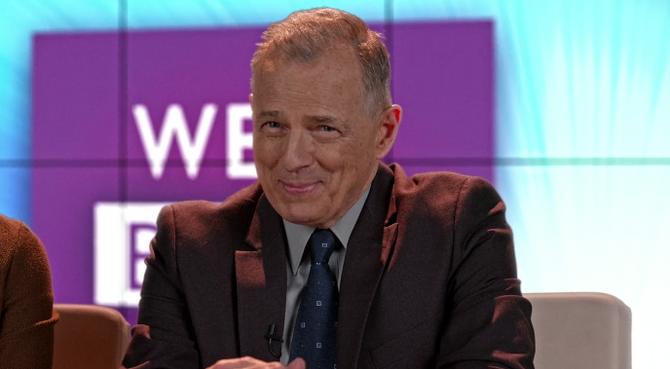 John Beard was the anchorman for local FOX 6 News. He has appeared in several episodes to report on events that have made the headlines in the Newport Beach area.

Because he was a real-life news anchor in the area, his appearance on Arrested Development is one of the first nods to the series being a faux-documentary.

John Beard worked at the FOX 6 news station in Newport Beach for several decades. In 1979 he reported on The Muffin Man poisonings. ("S.O.B.s") In 1994 he reported on Susan Smith's crimes. ("The Cabin Show")

John Beard reported on news of the Bluth family from time to time, starting with George Bluth's arrest in 2003. ("Pilot") He also covered stories about model homes in Iraq ("Let 'Em Eat Cake")​​​ and Merry Poppuns's attacks. ("For British Eyes Only")

Besides sitting behind his anchor desk, John has been seen elsewhere in Newport Beach. He dined at the same restaurant as Michael Bluth and Kitty Sanchez when they loudly threatened each other. ("Missing Kitty") He once gave an order to cut a fluff piece about the Atkins diet featuring George Michael Bluth. ("Let 'Em Eat Cake")​​​ He also attended the Bluth family's "Save Our Bluths" party in early 2006. ("S.O.B.s")

In 2006 he reported for FOX 6 on Lucille's theft of the Queen Mary. ("Flight of the Phoenix") In the mid-2000s John Beard bought a mansion from James Carr. When the real estate market collapsed in 2007 he was in debt, causing him to storm off his job at FOX 6. ("Indian Takers") He then got a job on the early morning talk show Good News O.C. with John, Jackie, and Joan. ("Borderline Personalities") At some unknown point in time (presumably between 2007 and 2012) John Beard was the host of the in-airport news station Outwest in Lounge which specialized in fluff news stories. ("Colony Collapse")

John Beard also has a son, John Beard Jr., who is a disappointment to his father. ("Colony Collapse")

John Beard: Another setback for the once prominent Bluth family as their frozen banana stand, a Newport Beach landmark, burns to the ground. A delicious whodunit... after this.  From "Top Banana"

Retrieved from "https://arresteddevelopment.fandom.com/wiki/John_Beard?oldid=54708"
Community content is available under CC-BY-SA unless otherwise noted.