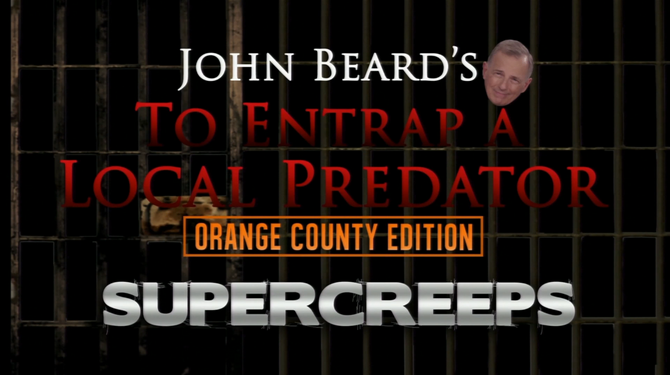 John Beard's To Entrap a Local Predator: Orange County Edition: Super Creeps is a reality TV show starring newsman John Beard. The show entraps child predators in the Newport Beach area. John Beard uses Mike's Hard Lemonade as a prop. It is a parody of the real-world To Catch a Predator TV show.

John Beard: And now the story of the awful people, who are about to lose everything, and the one newsman who had no choice but to entrap them all together. It's John Beard's To Entrap a Local Predator: Super Creeps

From "A New Start"

Tobias was caught in an episode of JBTEALPOCESC because he was going to the model home to see Maeby, but his poor choice of words made the cops believe he was a sexual predator. ("A New Start") His episode plays in prison which makes the inmates beat him. ("Smashed")

G.O.B. points to cameras from JBTEALPOCESC around the house.  ("A New Attitude")

John Beard comes back to the model home to retrieve some hidden cameras. It is announced that John Beard's To Entrap a Local Predator: Orange County Edition: Super Creeps will come back in July. ("Family Leave")

Tobias tells Murphybrown the story of when he was on John Beard's show. ("Emotional Baggage")